Two more French storytimes have come and gone since the last time I posted about them! I love that other moms are helping out--now there are five of us (three native speakers, two non-natives) who co-lead each session. It helps that we see each other regularly at French playgroup to brainstorm ideas for topics, books, and songs.

A maman named Brigitte and I did the ninth storytime, la nourriture (food), and last week was the tenth, les animaux de la ferme. The latter was similar to our storytime last fall on the same topic, which is of course fine, because repetition is the best way to learn language.

This time the leaders, Delphine and Mathilde, read a story from the magazine Histoires pour les petits (June 2010 edition) called "Soprano a perdu son cocorico" by Mireille Saver. It's a fun, long-ish story about a rooster who all of a sudden doesn't know how to crow any more. It includes a cute original song about the chickens ("Le rock'n'roll des gallinaces"), which the storytellers were able to share thanks to the CD that accompanied the magazine. We sang it several times, cot-cot-codec-ing like French chickens! 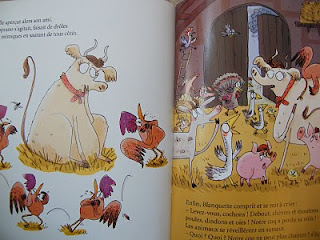 Mathilde also showed pictures of farm animals and barnyards, asking the kids questions about the animals. (She had a very engaging introduction: using an English book that had two-page illustrated spreads of animal habitats, she would say, "Les animaux de la ferme, comme cela!" but then show a picture of, say, undersea creatures or a zoo. The children would roar, "Noooon!" They loved it!)

Delphine once again shared the enormously popular and scatological De la petite taupe qui voulait savoir qui lui a fait sur la tête, a picture book about a mole who has been pooped upon and who interrogates his fellow barnyard residents to figure out whose caca matches the caca on his head. The kids loved this one and laughed a lot. 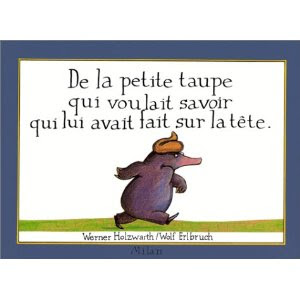 The final book from the farm animals storytime was the very cute Il etait dix petites poules by Sylvia Dupuis, a board book illustrating a song about where some hens of all colors were going to lay their eggs. Because it rhymed, the children were (usually) able to chime in on the last word of each line by looking at the illustrations. 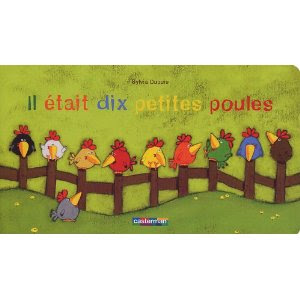 Below, for example, it says "L'etait une petite poule blue/Qu'allait pondre dans un pneu" (there was a little blue hen who was going to lay her egg in a tire).

And now for the storytime that I helped with!
Brigitte and I had a lot of fun with the food storytime; the hard part was narrowing our focus to just a few books and songs. (We have enough left over that we could do a second storytime right away if we wanted to.)
We started with a puppet show of La chenille qui fait des trous by Eric Carle (a translation of The Very Hungry Caterpillar), using these puppets that I had made for a tutoring session several years ago. (I love, love, love using drama as a language teaching technique!) 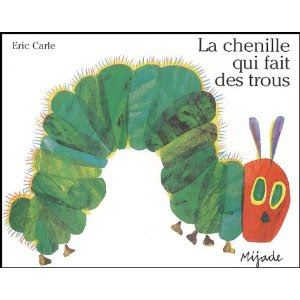 Our songs included: "Pomme de reinette et pomme d'api", Y, and "En voici, en voila" by Alain Le Lait, a very fun tune about different types of food in French. Because the last one has a lot of verses and is not a traditional song, we played it in the background while the children danced around. 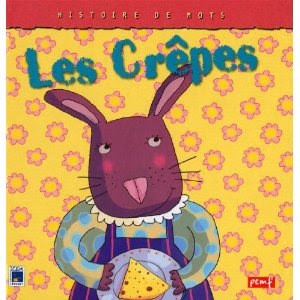 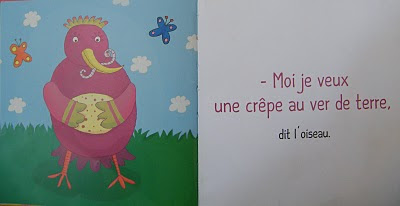 In the book, different animals explain what type of crêpe they want; as you can see above, the bird wants one with earthworms! Just adorable.

After the storytime, Brigitte and I served crêpes to everyone, insisting that the children tell us if they wanted Nutella or confiture on theirs. (Griffin was the oddball American--he asked for beurre de cacahuete, peanut butter, which we weren't even offering as a choice!)

New to this blog? Read about our French storytime history here: