a storytime that went swimmingly

I missed the third French storytime at the library (Griffin and I were out of town), but my co-leader Delphine reports that it went well and that 20-some people attended. Another friend, Jenny, helped out with the reading.

I don't have the exact titles of the books they shared, but one of them was a book in English that Delphine translated! (It was a retelling of "The Three Little Pigs" but featuring three little poissons.) They did our usual opening and closing songs, but no others, because the only fish-themed one she could find was the slow and minor-keyed "Les petits poissons dans l'eau." She also showed a ten-minute animated cartoon in French about sea creatures.

Even though Delphine didn't end up using the three books loaned to us by Les Petits Livres, a US-based French children's book rental company (similar to Netflix), we really appreciated being able to choose from a selection of fish-themed books for various ages. (Delphine says that one book was too small to show well to the group and the others not quite appropriate.)

But here are the three books we were considering: 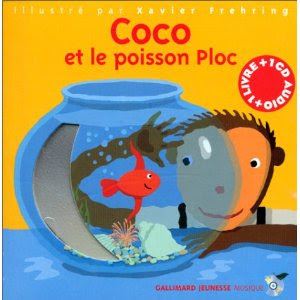 Coco et le poisson Ploc by Paule de Bouchet is a board book accompanied by a CD (the story narrated and accompanied by original music) about a little monkey (Coco) who takes his goldfish (Ploc) out of its bowl because it looks bored. Ploc is close to death after several minutes when Coco's mother happens to notice the immobile fish in her son's hand, but she returns it to the bowl just in time. Apparently this "Coco" book is one in a series of board books about the naughty little monkey.

This book kept the attention of my nearly-three-year-old son Griffin (who understands French quite well for an American toddler) and his nearly-five-year-old cousin Carl (who can understand a bit, especially when I speak with lots of expression, gestures, and cognates and also show pictures illustrating what we're discussing). I asked questions as we went along--"C'est une bonne idee de sortir les poissons de leur bocal?"--and to my delight both boys answered appropriately each time. (I hadn't realized that Carl would "get" it so well!)

Next up was Harry, le poisson qui pleure by Anne Konik. 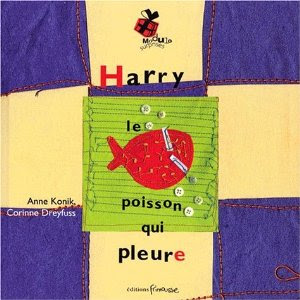 This book more remarkable for its illustrations than for its depressing story: the pictures consist of paper shapes that have been machine-stitched in a deliberately sloppy way. They're quite eye-catching. The book tells the story of a fish who is so unhappy after being removed from the pet store that he can't stop crying: he overflows the fishbowl, then the bathtub, and then even the pond that his new owner transfers him to. Finally he flows down a newly-created tear-stream into the ocean, where he finds other fish to befriend. 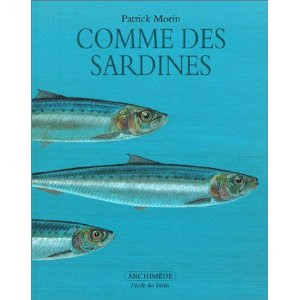 The final book for our consideration made use of a similar theme. In Comme des sardines by Patrick Morin, three sardines are separated from the rest of their school after a mackeral attack. They search and search for their family, even visiting the deepest and most dangerous parts of the ocean, and finally--oh joy!--find the school again. "Maintenant, elles ne seront plus jamais seules," the narrator reassures the worried readers. They will never be alone again from now on!

But then you turn the page to find a gigantic fishing net swooping down to capture the school, leaving the three sardines to watch their friends and family taken away to their death.

Wow. These two French children's books remind me of French films. (With these ones being the exceptions.)

But while Comme des sardines isn't a book I want to share with my tender-hearted two-year-old, I really liked the illustrations--they are lush and realistic and dark, and what's more, the ocean creatures are labeled with their scientific name, common name (in French), and sometimes other salient information. Plus, there is an essay at the end of the book about sardines. I learned new stuff from this children's book!

I'd like to thank Anne-Marie at Les Petits Livres once again for the loan of these three books. Stay tuned for my summary of the five books she has sent us for our African storytime session on November 26!