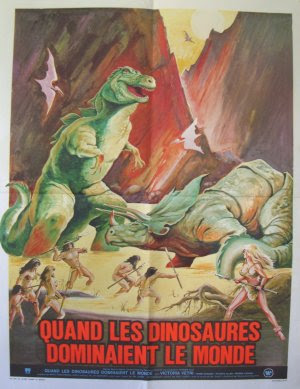 Griffin and I missed out on the January French storytime session because he had an emergency visit to the pediatrician (don't ask). Fortunately, this didn't mean I left Delphine, my co-storytime-leader, in the lurch, because we had decided to structure the program differently this semester!

To make it easier on us two, we asked for other volunteers to help lead the storytimes. Two other friends volunteered, one non-native speaker like me and one native speaker. So now there are four of us to share the prep work, which means that I only need to co-present once a month (our storytimes take place twice a month)! I am truly looking forward to attending with Griffin and being able to relax and listen and enjoy.

While I didn't attend the most recent storytime, I was at French playgroup when Delphine and Jenny were planning it, so at least I can relate what they covered here on the blog.

With dinosaurs as the theme, they had a topic that definitely appealed to the kids, but they struggled to find materials in French to share. They ended up taking a book or two in English and translating them into French, along with a song about dinosaurs marching. They also had a physical activity planned where the children tromped around the room like dinosaurs. And of course, everyone also sang the songs we traditionally use to open and close the storytimes.

Afterwards, the families adjourned to the arts and crafts area of the library, where they found crayons and coloring pages featuring dinosaurs. While the kids decorated their dinos, the parents were able to chat in French!

Everyone says it was a very fun session and that the kids loved it. I know Griffin would have! (You see, he still asks, hopefully, if we'll see dinosaurs the next time we go to the zoo.)
Posted by Sarah @ Baby Bilingual at 8:09 AM