a trip to storytime = a trip to Africa

Our fourth storytime session took us to Africa--only we could barely scratch the surface! But in our half hour, we managed to read three books, do our regular greeting and goodbye rhymes, and sing a few songs.

It was important to me that we read books that truly look like they take place in Africa, as opposed to the myriad picture books that feature animals like elephants and monkeys but tell a bland story about the importance of, say, going to bed or avoiding dangers. Anne-Marie from Les Petits Livres, an online French children's book rental company, kindly lent us five books to choose among for storytime: 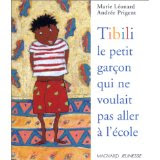 In Tibili le petit garcon qui ne voulait pas aller à l'ecole by Marie Leonard, a little boy who loves to play outside hates the idea of having to start school. He doesn't see the point: "Il préfère lire, comme son grand-père--pas sur du papier--mais dans le ciel, où le soleil chante le jour et où la lune danse la nuit" ("He prefers to read, like his grandfather--not on paper--but in the sky, where the sun sings during the day and the moon dances at night.") Tibili doesn't want to wear a school uniform instead of his pagne and wishes he could keep fishing for barracuda in the river and swinging from the vines with the monkeys. In a clever twist at the end, he does find a good reason for needing to learn to read and eagerly starts school after all.

Ironically, my friend Delphine, who co-leads the storytime with me, says that this is the first book that her younger sister learned to read by herself!

It's a lovely book with colorful illustrations and very rich culturally; it clearly takes place in Africa, given the rich details about the animals and the habitat and Tibili's daily life. We ended up not using it in storytime because we just didn't have time! 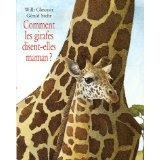 Delphine and I both liked Comment les girafes disent-elles maman ? by Willi Glasauer, also a book about the first day of school. In this sweet story, the teacher (a woman with a baby tied to her back) runs through roll call for all her new students (baby animals). Everyone is so concerned when the baby giraffe doesn't speak up that they tramp off to various experts who should be able to help the giraffe learn to talk.

We then see a drawing of the mother and baby rubbing their necks together, their heads side by side. This then inspires all the other mothers to show their babies how much they love them, so the next page shows all the animals cuddling, playing, and kissing--including the teacher with her own naked baby! It's charming.

Delphine and I opted not to share this book during storytime because we didn't trust ourselves being able to perform all the animal noises and voices dramatically enough. Highly recommended, though!

Another book that really appealed to me, and to my surprise, my son Griffin, was Baobonbon by Satomi Ichikawa.

I say "surprised" because this book and most of its concepts are so foreign to my American toddler! A little boy who can run fast like a gazelle is taking bananas to market for his mother (a walk that takes hours and hours) when he stops to rest under a tree. But it's not just any tree--it's a talking baobob who confesses to being just as hot and tired and thirsty as the little boy. Generously, he offers to go fetch water for the tree.

(Griffin had heard of baobobs before, thanks to the Le petit prince board books that I picked up at a conference.)

He finds villagers willing to bring water--in exchange for half of his mother's precious bananas. But when they return to the baobob, naughty baboons have eaten them all up. The baobob then gives its fruits to the other children and tells the boy a secret recipe for making candy out of the seeds of the fruit.

When he sells the special candy at the market, he makes more money than he would have selling bananas, and is able to bring home many more supplies for his family. It's a story about the value of perserverance and generosity--but it's so well told with such engaging illustrations that you just get swept up and don't think about the "moral" until afterwards.

We decided not to read this one to the group either because it was quite long (and we already had another long one planned). (But I'm glad to be able to share it here on the blog, at least!)

I chose to read Zékéyé et la toute petite musique by Nathalie Dieterlé because I knew it would be fun and interactive for our listeners. It's 30-some pages long, but the pages are big with simple, cheerful illustrations, so I felt sure it would keep the children's attention. 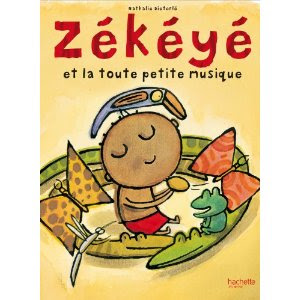 Apparently this little boy appears in an entire series of books. He is very little and clever (though not as small or as smart as Kirikou, another tiny, precocious African boy). Poor kid, he is too little to help play music to bring the rains to his village, so he makes his own flute-like instrument. When the grown-ups' music ends up causing all sorts of problems, Zékéyé remedies the situation by playing his homemade flute. Everyone dances for joy, and this time, he is invited to join them in the celebration.

Throughout the book, we hear the grown-ups' music ("et Ta et Ta et Tam Tam Tam") and Zékéyé's "toute petite" music ("et Zi et Zi et Zou et Zou") like a drumming in the background and a whistle in the foreground. Each time the music appeared in the book, the listeners pounded on the floor like a drum or ZZZed through their teeth like a clay flute. I think the grown-ups enjoyed it as much as the kids!

(And there were a lot of grown-ups there this time; this storytime took place the day after Thanksgiving, when a lot of adults have the day off work, so most of the kids brought their papas along. Even my monolingual husband attended. Seventeen people attended, which was more than we expected for a holiday.)

Our final book selection was quite short and quite silly: Chtok-Chtok le chameau by Edouard Manceau (also one of a series): 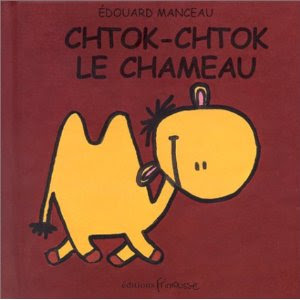 It reminds me of Rudyard Kipling's Just So stories, except much, much, much shorter, in that each book in the series explains the origin of some aspect of the animal. For Chtok-Chtok, it was his humps. Very cute and a great choice for storytime because it was so quick.

Reading about this camel meant that we could play a fun song called "La danse du desert." Unfortunately no link to the entire song exists--it's an original from the Canadian company Kidzup, whose French CDs for children are fantastic--but you can at least hear a clip here (number seven). Also unfortunately, while it's got a great beat and evocative Eastern flute-y music, it's not easy to sing along to when you've only heard it once or twice. (So that's why I said we "played" the song, not "sung" it.)

The other song we did sing, and even dance around to, was "Y'avait des gros crocodiles," a French version of Shel Silverstein's poem "The Unicorn" about Noah's Ark, which was made into a song by the Irish Rovers. (I remember singing the French version at Lac du Bois, French camp with Concordia Language Villages, when I was 16!) At storytime, we played a version of the song that was just the chorus, repeated several times, with some fantastic upbeat African music before and after each chorus. We showed some movements that imitate the animals in the song and then made the kids get up and dance! It was such fun we played the song a second time so we could all dance some more.

The other piece that I wanted to share didn't work out because the wifi connection kept dropping--but I can do it here! I found on YouTube the opening sequence from the award-winning Broadway music The Lion King--in French! This play blows me away--the costumes and set and music are so creative and captivating. Watch it. Now!

See? Doesn't it give you chills? Here are the French lyrics for the song, "Le cercle de la vie." (Although probably half of the words are in an African language--but it doesn't even matter that I can't understand everything they're singing.)

This storytime was my favorite one so far! Only one more left this year. My supervisors at the library will let me know if we can continue them in 2011.