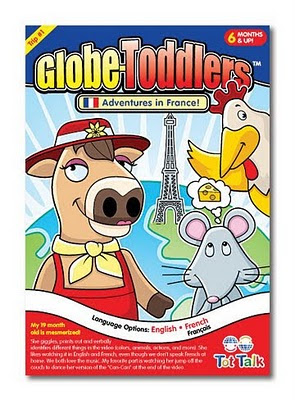 I have complained before about the lack of quality videos in French for toddlers available in the US; Brainy Baby has particularly disappointed me. Since Griffin has started potty training, however, we have been watching videos again, just so he can have something that keeps his attention while he spends time on the little potty in the family room.

The best one so far is Globe-Toddlers Adventures in France from the company Tot Talk. Like most of the other language-learning videos for young anglophone children, it features footage of real kids interacting with toys, puppets performing actions, live action shots of animals, people, and places, and toys by themselves. (There's no animated clips, however, which is fine by me.) Similar to Brainy Baby and the others, the target vocabulary is mostly limited to single words and very short expressions presented a small number of times (ie, not repeated often enough or in varied contexts). The soundtrack is, predictably, classical music and some folk songs, but here the composers are French.

However, unlike the other videos, Globe-Toddlers Aventures in France is not just one generic program of kids frolicking to Mozart while a narrator reads words in French, then another narrator re-records the voiceover in German and they sell it as a German video, and another re-records it in Spanish and the sell it as a Spanish video, etc. This one is definitely unique! With segments on castles, vineyards, fashion, and the can-can, this DVD was clearly written to introduce children to French culture.

So therefore, my complaints about its weak presentation of spoken French are mitigated. The company's website doesn't explicitly state that the DVD focuses on French culture rather than the French language--and perhaps it should, because I just expected it to include narration, dialogue, language use in context--but when I approach it from that perspective, I have a higher opinion of the DVD.

For example, in "le fromage," we see different types and shapes of cheeses as well as the cows, goats, and sheep who produce the milk to make cheese. My nephew, Carl, age four, who watched with us, was surprised to learn than cheese can be made from sheep's milk. In "l'amour," lots of little boys and girls hug and kiss each other. In the fashion segment, some of the puppets are sitting on the terrace of a café with shopping bags beside them. When they arrive, they faire la bise--kiss each other on the cheek twice--very, very French, and a nice cultural touch. (Throughout the video, however, the puppets interact without ever speaking, which is unfortunate.)

These puppets are very accomplished. In addition to gadding about Paris in the "La mode" episode, the cow also cuts shapes out of cloth and sews them into a dress. (This--and some other bits--went right over the head of my toddler. Observing the cow holding the cloth with its mouth in order to manage the scissors with its hooves, Griffin said with surprise, "He eat da clothes!")

The segments really are just a brief introduction to the idea--the concepts and processes depicted are so streamlined you really would have no idea how clothes, bread, or cheese really are made or what a castle is. I was also put off by the very first episode, "La mode," which features a fashion show of mostly little girls being coached to walk and pose and pout like models. (You could tell by their head and eye movements that someone beside the camera was showing them how to move--not natural and a tiny bit creepy.) Then the girls smeared on make-up. Maybe some people think that's cute? But it was a little strange to be watching this video with two- and four-year-old boys who were all of a sudden learning how to say "lipstick" in French, when there are plenty of other higher-frequency clothing-related words that it would be preferable to expose them to, such as, colors, patterns, buttons, zippers, laces, etc.

On the other hand, some viewers might take offence that one of the segments is about vineyards. We see the grapes growing, the grapes being stomped, the white wine in wine glasses--and then the narrator tells us that this makes "jus de raisin--grape juice! Well, if you're going to have little girls prance around and wear make-up, acting older than they really are (in a video targeted to babies six months and up), then just call this product of the French vineyards what it really is--wine, beautiful wine!

I also had a few "WTF?" moments while watching the video, like when the frog puppet went bowling with what looked like wine bottles as the bowling pins. (Why not show pétanque instead?)
Linguistically, I only caught one error--calling the chicken "poulet," which is the term used for the meat of the chicken, while the animal itself is a "poule."
So what did Carl and Griffin think? Well, with sides of popcorn and cantaloupe, it held their attention for the full 45 minutes. Carl had fun yelling out English translations of the narrator's words ("Hey! That's French bread!"), and they both laughed uproariously in parts, like when the frog knocked down the sand castle. Tot Talk also sells other materials, like placemats, of which I bought a few and gave to Carl and Griffin for Christmas, so I was especially gratified during the vineyard episode when the narrator pronounced "raisin rouge" (red grape) and Carl cried, "On my French placemat, it says raisin rouge!" Griffin loved hearing the song "Sur le pont d'Avignon" in the castle section--he sang along joyfully. And during the highly-touted can-can scene, both boys got up, held my hands, and danced along--something I never thought I'd see Carl do!
(I also gave this video and the placemats to my friend Amy's family for Christmas--she speaks some French with their four children--but I don't know what she or the kids thought of it. I'll ask her to comment!)
Ultimately, the fact that there's no explanation or discussion of any of the ideas presented means that it's up to la maman and le papa and la babysitter to sit with the child and talk about what's going on. It's the grown-up's narration that will bring the video to life. So if you're willing to sit with your child for five minutes (one episode at a time) or 45 (to watch them all straight through, a little less if you skip "la mode" like I now do) and narrate and ask questions, then this is a good choice for a DVD for your toddler or preschooler, whether you speak French or not.
PS: We also bought their Adventures in Mexico DVD, which Griffin watches with the French soundtrack!
Posted by Sarah @ Baby Bilingual at 10:33 AM