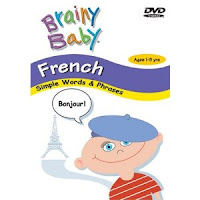 How we learn languages most naturally: We are immersed in the language throughout our waking hours, encountering words and phrases in context, hearing multiple repetitions of many words from many different speakers.

How "Brainy Baby" wants our toddlers to learn French: by watching a short video whose unseen narrator tells us what we're looking at in one- and two-word phrases, repeating the words five times or so. We see clips of noses, for example, while the narrator enunciates, "Le nez. Le nez. Le nez. Le nez. Le nez." Then it's off to ears, colors, simple greetings, numbers, and so forth.

To my surprise, Griffin will actually sit and watch this, even though he already knows all the words. (In fact, he even corrected the narrator when she called the parrot a "oiseau"--bird--by saying, "Non, un perroquet"!) This could just be because of the novelty of it; he has not watched many DVDs in his short life. Do you know a three, four, five-year-old who would sit through this more than a couple of times? (The DVD claims to be appropriate for ages 1-5, which is quite a range.)And even if your one-year-old could, would you want to plop him in front of the television for an hour or two? (Well, okay, if you're like me, there are plenty of times where you've been tempted just so you can take your first shower this week and then fix dinner.)

The teacher in me, though, wished that the Brainy Baby folks would move beyond naming objects and actually do something with the language! Eventually, they did present numbers paired with objects, colors with objects, and greetings and leave-takings via children at a door, but that was it as far as real-life contextualized usefulness. And who can learn a word with only five repetitions? Not me, even in my native language, and I'm a grown-up with lots of metalinguistic knowledge (and a year of high school Latin) to draw upon.

When the video started introducing verbs, it got my hopes up--we see a baby drinking from a bottle, or a child eating, and the narrator tells us the infinitives, boire, to drink, manger, to eat. Why not take it a step further and make sentences? We have already seen the words for baby, boy, girl. Why not tell us that the baby is drinking milk or that the girl is eating a pizza? Then give the girl milk, and bring in a boy to eat pizza and drink milk, and point out that the milk is cold and white and the pizza is hot and red, and then bring a stuffed animal or two to pretend to eat pizza and a baby who smears the pizza over her face and arms but doesn't actually eat it....and then our would-be bilingual babies might eventually conjugate the verb and make their own sentences without even thinking about it! We'd get lots of repetition in context of more than one or two words at a time, at the very least.

Oh, and while it's great that a native speaker of French was pronouncing all the words, why not have several speakers--a male and a female, someone with a mainland French accent along with someone from Quebec and someone from West Africa? And why not get kids to do the talking--surely children watching the video will respond better to hearing another child's voice tell them what color something is?!

It also seems like a video purporting to teach kids French could also touch on some elements of culture, even simple things like pointing out colors using the French flag, or introducing the word "oeuf" with a child using a spoon to eat a soft-boiled egg in a little egg cup, or presenting the word "boire" as a child drinks hot chocolate out of a bowl. It wouldn't have to be filmed in France or Martinique or Madagascar to be able to show francophone culture! (Although it would be fun to see, say, a Mardi Gras or Carnaval parade to teach colors or monuments like the Eiffel Tower or cathedrals to introduce other adjectives. If this video even attempted to introduce any adjectives other than colors, that is.)

The too-few sections that encouraged the viewer to respond were welcome, though. Griffin would wave hello and good-bye to the kids, and when the narrator asked, "De quelle couleur est....", Griffin would call out the name of the color. More of these types of questions would be helpful, just easy ones like "Do you have a teddy bear too?" or "Can you hold up five fingers?" or "How many Eiffel Towers do you see?" or "Where is your nose?"

Oh! I almost forgot to tell you about he most heinous part: the "music video" section of children frolicking on a playground while a French translation of "Mary Had a Little Lamb" played over the soundtrack. This just seemed ridiculous to me: one, use a real, traditional children's song in French, for pete's sake, and two, have the video footage at least attempt to mirror what is happening in the song! Could it have been that hard to take a kid to a farm and film him playing with a lamb? Better yet, even easier, show kids playing in a garden for "J'ai descendu dans mon jardin" or kids with musical instruments for "Bonhomme, bonhomme, sais-tu jouer"!

So, overall, I'd say this is worth checking out from the library if you want your kids to see video clips of other kids while a French lady says some words. And if you speak French and can supplement the meager soundtrack with a running commentary and help your children interact more with the video, then go for it. But spending $20 in hopes of getting a brainier baby out of this? I wouldn't recommend it. Sorry.
Posted by Sarah @ Baby Bilingual at 12:49 PM