I've been volunteering at our public library's Homework Center since 2005, tutoring kids on a drop-in basis in whatever subjects they need help with, which means lots of math, lots of language arts, and occasionally everything else--even Spanish!  Very few students come in for French, unfortunately, though that's my favorite class to tutor.

However, a boy whom I have known for years now told me something that delighted me: he decided to take French in middle school because of me!  So now whenever he sees me around the library or the neighborhood, he greets me with a "Bonjour" and a "Ca va," and he even makes an effort to speak French to Griffin, too.  At the Homework Center this past school year, we reviewed vocabulary and played games and did worksheets in French together.

His mother recently asked me for some suggestions of what he can do during summer vacation so as not to forget what he worked so hard during the school year to learn.  This phenomenon, known as the "summer slide," exists in all school subjects, but especially math, reading, and languages.  Use it or lose it, right?

And since getting a solid understanding of the basics the first year or so of language learning--as well as developing confidence and a genuine interest in the language--is so crucial to your success if you're hoping to continue with it, I want to help my young friend and all other language students find ways to have fun with it and keep practicing over the summer!

(Hmmm....as I type this post, I recognize my hypocrisy: Griffin just completed nine months of Spanish immersion preschool, and other than taking him to the occasional Spanish storytime or helping him get through an Easy Reader book in Spanish, I have done nothing to help him review what he has learned. But our French time together is so precious, I don't want to replace any of it with Spanish right now, and his dad doesn't speak any Spanish!  Maybe my husband should start playing Spanish music for kids when Griffin's in the car with him.  We should find some Spanish lullabies for bedtime, too.)

So as long as I'm preparing a list for my favorite middle school French student, I may as well share it here on the blog.  Your suggestions, ideas, and questions, as always, are very welcome!  This post will provide some general advice for children (or adults!) learning any language but on vacation for a few months; my next post will offer specific resources for young students of French.
If money is no object (ha!  if that were true you'd probably be reading this while yachting off St. Bart's and would roll your eyes and say "duhhh" when I suggest that you travel with your kids):
If any of the following are available in your area:
If your children are more or less beginners (after a year of middle or high school language study, a semester of college, or some exposure via camps, travel, or family members), encourage them to try the following:

If your children are at an intermediate or advanced level, encourage them to do all of the above, plus:
And, of course, read: 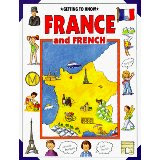 Moreover, to increase familiarity with and interest in the cultures and countries where the language is spoken, your child could:

So what are you waiting for!  School starts back up soon--don't let yourself lose more of that language!
Posted by Sarah @ Baby Bilingual at 4:56 PM