cheap and easy in the target language: Go Fish

If your kids are anything like my five-year-old son, you can get them to do almost anything if you turn it into a game--the Getting Dressed Race (first one to finish wins), the Brushing Teeth Un-Race (last one to finish wins), Laundry Basketball, Walking Backwards to Distract Little Boy From the Fact That He Doesn't Want to Go Where You Want Him To Go....

Griffin loves board games, too, so much so that he has been known to combine them (for example, "Chesskers," which features elements of Chess and Checkers), play them by himself during quiet time, and even burst into tears when "the red guy won" (despite the fact that he himself was the "red guy"-- and the blue guy, and the green guy, and the yellow guy!).

He likes card games a lot, too, especially once I learned how to help him see all his cards simultaneously (without placing them face-up on the table in front of him--and all his opponents): turn an empty egg carton upside down, make a diagonal slit at the bottom of each egg cup, and slide the cards into the slits.

A few months ago, Griffin was obsessed with Go Fish and wanted to play it All. The. Time.  And I realized that it would be easy to turn this simple game with a common deck of cards into one that would require him to speak French with me!

1.  Select about 12 four-letter words in the target language that a child can illustrate without any help.  (I deliberately picked words that used all the diacritical marks in French, like the accent aigu over the E in vélo, bicycle, and the letter pairs that cause trouble for English speakers, like i/e and j/g.)

2.  Spell out the words on the index cards, with four cards devoted to each word, writing one of the letters in each upper left corner:

3.  Ask your child to illustrate each of the cards: 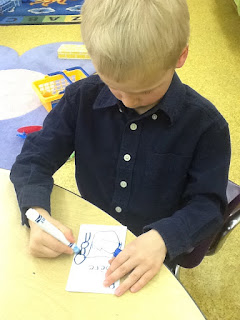 5.  When someone collects all four cards for one word, he announces what it is and spells the word as he places the cards on the table in order in front of him.  (Yay, alphabet and reading practice for our kiddos!)

6. And finally, since I'm turning into an "early literacy nerd" (I used to be a "word nerd," but five years working with emergent readers at the public library has fine-tuned my linguistic nerdiness into "how can I maximize the learning potential of this game?"), I always ask Griffin to make up a sentence--or a story--using all the words he won with.

1.  If you want your child to make sentences afterwards, include a few verbs on your cards.

2.  Figure out how to say "go fish!" in the target language so that you can tell your partner that he needs to draw a new card.  (I assume it's "Va à la pêche" en français?)

3.  Ignore my advice to use index cards.  Griffin very quickly realized that he could see right through to the other side of the fairly thin white paper to figure out what cards I already had in my hand or what was on top of the draw pile.  Use card stock cut into the size of playing cards.  Or scrapbook paper.  Or laminated construction paper.  (Or just write and draw in pencil, not markers.) 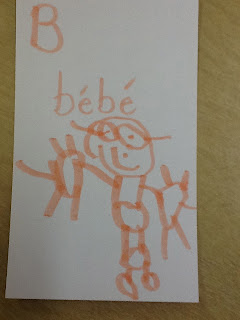 See?  Cheap and easy in the target language, plus a game that your child helped create, which (theoretically) means he feels some ownership of it and is thus more eager to play it and speak the target language with you!
Posted by Sarah @ Baby Bilingual at 11:07 PM