Our eleventh (!) French storytime zoomed into the library last week with a boatload of songs and books about transportation, to the delight of many little boys (and the little girls didn't seem to mind them either).  As usual, our selections tended towards the eccentric, because we're limited by what we own (or are willing to translate into French), which means that we neglected to include any books about trains as none of us had any!  Oh well--the little boys forgave us. 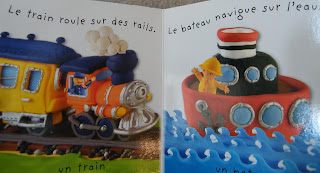 After our traditional opening song, I showed pictures from Les transports by Nathalie Bélineau and Emilie Beaumont, part of a delightful series of board books for the very young, Imagérie des bébés, which feature detailed and whimsical photos of clay creations.  I tried to engage les enfants by asking lots of questions about each vehicle ("Qu'est-ce qui est plus grand, la moto ou la bicyclette?") and by making deliberately false statements ("Voici un bateau qui vole dans le ciel!").

As an introduction to our next book about a bus, we sang "Les roues du bus," a collaborative translation of "The Wheels on the Bus," which we had prepared at French playgroup earlier that week.  Of course, this bus had the expected portes, essuie-glaces, enfants, and conducteur, but we also ended up with a few animals when we asked for suggestions from the kiddos. 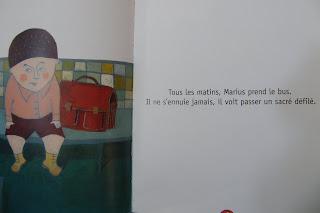 That worked as a lovely transition to our next tome, Le petit autobus by Sandrine Chambéry, which features a normal city bus with some very unusual passengers--le pêcheur de mauvais temps (the man who fishes for bad weather), le dresseur des cauchemars (the nightmare tamer), le moulineur de devoirs (the man who grinds up homework), le jongleur de mots (the word juggler), la tricoteuse d'histoires (the story knitter), and Marius, the schoolboy who observes them all.  (These eccentric characters sailed right over the children's têtes and brought some puzzled looks to their parents' faces, but at least it was a book about a bus, right?!) 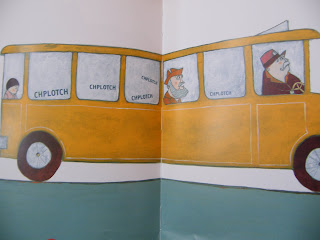 Next, while we didn't have a train book, we did share a train song, "Dans le pré s'en va le train," which instructs the singers line up, place their hands on the shoulders of the person in front, and hang on while they choo-choo-choo through the countryside.


and then read Pompier by Amanda Askew, a book about a day in the life of a firefighter, which concludes with the firefighters rushing to a school to put out a cafeteria fire (which made a nice parallel to the preceding song, in which two cooks blame each other for a kitchen fire). 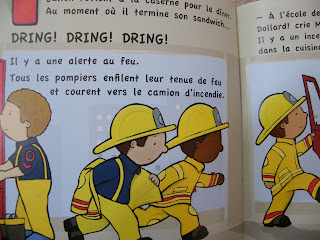 Then after our usual farewell song, we handed out puzzles with trains, cars, buses, and so forth for the kids to play with while the parents chatted.  All aboard!
Posted by Sarah @ Baby Bilingual at 5:28 PM