Ma'am, we heard you speaking English to that child. Hand over your mouse. From now on you're not allowed to blog about raising children bilingually!

Four and a half years ago, I started spending one afternoon a week with my baby nephew, Carl. His parents, while not French speakers themselves, had asked me if I'd like to try using only French with him, just to see what could happen. As a French teacher who was planning on having children myself down the road, I was delighted with the idea of being able to "practice" on my nephew!

I quickly discovered that maintaining a constant monologue in my second language with a baby could quickly becoming challenging, in between the gaps in my vocabulary knowledge and the lack of response from the baby. But as Carl and my French baby lexicon grew, this process also grew easier.

I learned more songs, rhymes, and fingerplays (and invented others), read to him constantly, took him on walks to show him the world, and played with him--all in French, all the time. All along, I had been determined never to speak English to him. (Like OPOL, but OTOL--one Tatie, one language.)

Because I had never spent that much time with a child that young, I didn't realize that the fact that Carl was making two- and three-word sentences in French at age 18 months was remarkable. It just felt natural that he would start putting words together in French with me the same way he was doing in English with everyone else. My notes from that summer even show one four-word sentence, prompted by my jotting down notes about what he was saying: "Tatie ecrit stylo livre" (~Tatie's writing with her pen in a book)! It has since become clear to me that lots of kids don't communicate that well in their first language even at age two, despite the fact that their parents have given them just as much attention and input and stimulus.

Carl is one enfant incroyable!

But after Griffin was born, right when Carl turned two, everything changed. I stopped babysitting Carl once a week. While we still saw a lot of each other, it was usually at family gatherings, where he would hear me speak English with all the adults. Even when I encouraged him to talk to his new cousin in French "because Griffin only speaks French," he'd look at me scornfully and reply, "Tatie, Griffin can't talk yet."

As a result, Carl heard less and less French. He'd listen to a French CD or video now and then, and his mom would read to him some in French--I loaned them lots of board books and picture books--but he was reading on his own at age three and quickly developed a preference for nonfiction. (Or perhaps more accurately, he continued to demonstrate his independence in his taste in books, along with everything else.)

When Griffin was a toddler, my sister-in-law and I started taking turns watching the boys on Wednesday mornings--once a week at my house, once a week at hers. But even when I had two precious hours with just Carl and Griffin, they always wanted to play and yell and run, not sit down and let me read to them. I gave up trying to plan "lessons" for Carl's visit and just let the garcons be garcons.

However, it has become harder and harder to speak French to Carl, much more so even than when we were just starting out on this journey. As he loses his French, his speech gets more complex and sophisticated in English. Our conversations are simple, sometimes stilted, with me relying more and more on cognates, expression, and gestures to convey meaning. Often I can't answer his complicated questions--"Tatie, why won't Griffin go poop in the potty?" "What is hummus and why are we having it for a snack when Griffin and I want cookies?"--and resort to "Parce qu'il est petit" (because he's little) and "Je ne sais pas" (I don't know). And when Carl attended one of my French storytimes, he got bored right away because there was so much he didn't understand.

To my surprise, though, Carl has never actively rejected French. He doesn't ask me why I speak it with him and Griffin but no one else (maybe he thinks that aunts just have to speak another language with little boys). He doesn't insist that I speak English with him. He doesn't ask me to play music in English instead. He doesn't seem to notice that Griffin speaks a mish-mash of English, French, and Griffinisms.

So while I'm disappointed that the French didn't stick for Carl, I'm thrilled that he still has an open mind about it, and I'm sure that when he goes to learn another language in school, he'll have an easier job of it because of his early exposure to a second language. And who knows, as our families grow, the boys may find that it's fun to have a "secret" language among their cousins. 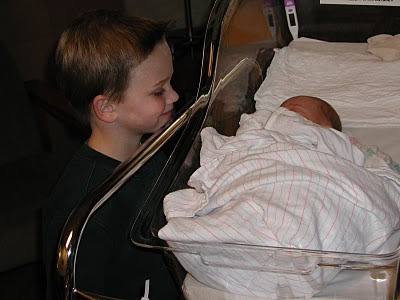 Speaking of growing families....Two weeks ago, Carl's sister Eleanor was born. His parents dropped him off in the middle of the night on their way to the hospital. He was a little freaked out--his mom is in the car screaming, he's wearing his jammies and coat and shoes, and he's all of a sudden at Tatie's house when it's still dark. I held him in my arms--this big boy, almost five years old, who hardly ever stops moving long enough for me to give him a quick kiss on the top of his head!--I held him in my arms and rocked him and talked to him about what was going on.

But of course, I was speaking French, and that didn't help. In fact, having to filter ideas like "Mommy doesn't mean to scare you, she's just hurting because the baby is ready to come out" through French made it even harder for him to understand what was happening.

So for the first time in his entire life, I spoke English to my nephew. It was clearly what was necessary at the time; I don't regret it at all.

And you know what? The bilingualism police didn't come knocking at my door to take away my mouse and arrest me for inconsistency!

I'm back to only speaking French with Carl, but I'm relieved to know that my "lapse" didn't throw him off, and that if I do decide to use some English with him now and then (to answer his endless "why"s), it will just mean that I'm choosing to communicate rather than obfuscate.

Besides, I can start speaking French with baby Ellie, and since she'll hear her big cousin Griffin speaking it too, it might stick this time around! And then Carl will want to be able to understand what Ellie and Griffin are saying to each other, so that'll be great motivation for him to remember and replenish his French.....

This post was written for inclusion in the November Blogging Carnival on Bilingualism. Check it out!
Posted by Sarah @ Baby Bilingual at 12:35 PM