on being a non-native speaker

This post is part of the February 2010 Blogging Carnival on Bilingualism. 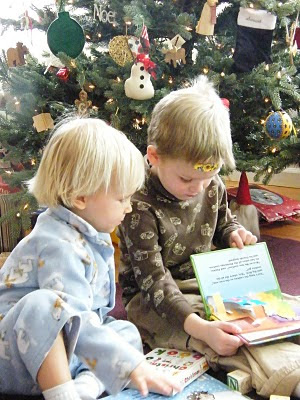 Nearly four years into this blog, I still have doubts about the practicality of raising my son bilingually and the possibility of teaching my nephew French. These days, I don't see Carl (my four-year-old nephew) often enough or for long enough periods of time to reinforce what French he already knows, much less give him new words. And now that he can read by himself in English, he devours books and doesn't need us grown-ups to read to him as much. (We did have a lot of fun three weeks ago, though, reading a bilingal English-French book about a monkey; Carl read the English, I read the French translation, and occasionally he would join in on the simplest sentences in French.)

What I really want is for Griffin and Carl to speak French together, but it's too soon for that to happen effectively right now, given that Griffin, is, you know, a two-year-old who still mispronounces a lot of words, leaves out other words, and makes up his own expressions for a lot of things. Throw in some often-mispronounced French words into his English sentences, and, well, sometimes even his daddy needs me to translate from Griffinese to English! There's no way that Carl can follow much of what Griffin says. I'm worried that once Carl starts kindergarten next year and he meets a school-full of Anglophone kids he won't see any point in speaking French at all.

But I have dreams of French becoming a special language for Carl and Griffin (and any future siblings), one in which they can whisper secrets to each other, tell stories in sandboxes and treehouses, and giggle in while playing with flashlights in sleeping bags at cousin slumber parties. I can picture Carl coming over to our house for a sleepover en francais, where we have croques monsieur for dinner, then play board games like Loto and La roue de la fortune, and finally fall asleep watching Kirikou et la sorciere or Caillou.

I think for now what's important is for me to keep speaking French around Carl but not force him to respond in kind and to keep exposing him to fun stuff like music, books, and videos in French. Give it time. Just give it time and don't pressure him.

Then there's Griffin, our darling boy who has just entered the "terrific twos," who will walk down stairs holding my hand on one side and his daddy's hand on the other, and turn to him and say, "Be careful!" and then swivel his head to me and caution, "Doucement!" He'll ask Maman for a "bisou" and an instant later clamor for a "kiss!" from Daddy. Living in two languages doesn't seem to faze him in the least.

It fazes me, though. I'm not a native speaker of French; no one in our family is. I spent two school years in France (one as a college student and one as a high school English teachers), majored in French, got a masters degree in French, taught university French for seven years, and even directed plays in French; still, everyday interactions with Griffin send me flying to the dictionary.

At first it was baby-related vocabulary: my French textbooks never taught me how to say, for example, "After two hours of pushing and seventeen hours of labor without an epidural I just wanted him the hell out of my ya-ya" or "Griffin just had a diaper blow-out all over his onesie while he was sleeping in the bouncy chair."

Now it's a linguistic race to keep up with him and describe what we're doing and why and what next!

As he started to grow and pay attention to the world around him, I tried to narrate everything I did in French. Even when I was living in France I never spoke so much French in one day! In only three stituations have I spoken English to Griffin: when he's asleep and I feel like I'll burst if I don't address him in my mother tongue; when his daddy and I are singing duets; and when we attend storytime at the library (where it would be strange and rude for me not to participate).

Reading to Griffin usually entails a vocabulary challenge for me, because so often he hands me a book in English that I have to translate on the fly. Just yesterday, during Bear Snores On, I encountered the following words and expressions that I never had to say before in French: "badger," "wren," "gopher*," and "an itty-bitty mouse, pitter-pat, tip-toe, creep-crawls in the cave from the fluff-cold snow." I do a lot of circumlocuting these days!

And since I don't have time (or don't make time, rather) to read to myself in French these days or call my friends in France to chat, and I'm not hanging out with French teachers on a daily basis, my own French is degenerating. I have noticed sloppy pronunciation, incorrect articles and pronouns, imprecise vocabulary! (Does this mean I now sound like a child or teenager?) Even two and a half years ago, when I was still teaching at Colorado State, I worried that I wasn't good enough to teach French to my baby nephew.

This hit home last week when I was talking to Griffin at the library. A woman overheard us and expressed amazement--not that Griffin was being raised bilingually, but that she could understand me! "This is so great!" she enthused. "I never got it when my teachers spoke French to us, but I understand everything you say! You speak so nice and slow!"

Dear readers, I wasn't speaking slowly on purpose! It was my normal rate!

I am so far from being a native speaker of French I sometimes wonder if I'm doing him a disservice linguistically and (more importantly) will later regret depriving myself of that maternal intimacy that comes from speaking one's native language with one's child. And what will happen as he grows up and only has the kids at French playgroup to converse with?

I still strongly believe at birth is an ideal time to start teaching languages, and I do think that non-native speakers are very capable of teaching their second (or third or fourth...) language. I just have doubts sometime about this particular non-native speaker.

*I now know that, shockingly, "un gaufre" is a gopher and "une gaufre" is a waffle. Pity the sleepy diner who thinks she's ordering a delectable breakfast pastry and ends up with a rodent in maple syrup instead!
Posted by Sarah @ Baby Bilingual at 8:35 AM