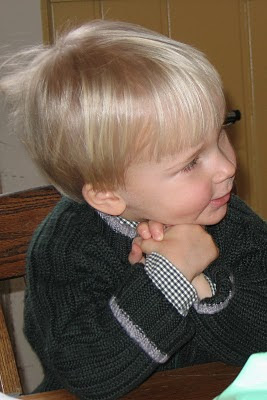 Griffin's sentences continue to grow longer and more elaborate, now involving prepositions and adverbs ("Daddy come in here now!"), pronouns ("My this!" for a new toy whose name he hadn't learned), and an increasing number of adjectives. He has moved beyond the simple naming of things and expressing physical needs, but will still happily discuss his "caca" (poop). He remains very bossy, yet very loving. (Sometimes simultaneously, in fact, as in when he ordered Ed one morning last week, who had kissed him good-bye and then me, "Daddy kiss Grandpa!")

Griffin definitely speaks more English than French--of course, he hears it more often--but spices up a lot of his sentences to other people with words in French, and he's quite willing to speak French with me. Read on....

Griffin: "Mommy chatch off read-it book fauteuil bascu Mimi Bear come in!"
Translation: Mommy, take off the blanket (chatch is his pronunciation of couverture, "blanket") and read me a book in the rocking chair (un fauteuil à bascule). I want Mimi and Bear to sit with us too.

Griffin: "More babaganounours!"
Translation, or rather, explanation: Nounours is a teddy bear, and baba ganoush is a Middle Eastern eggplant dip. He had inadvertently combined the two words (in just about the cutest possible way!).

Maman: "Je t'aime, Griffin. Je t'aime même quand tu fais des bêtises. Mais je préfère que tu ne fasses pas de bêtises." [I love you, Griffin. I love you even when you're naughty. But I'd rather that you not be naughty.]
Griffin: "No throwing blocks!" [Throwing things is his most egregious and most common misbehavior. It's gotten to the point where I can look at him sternly as he raises his hand with a toy in it, say simply "Ne…", and he'll fill in the "jette pas." Of course, he might still throw the toy, but at least he can tell me in French that he knows he's not supposed to!]

Griffin, approaching the fire in the fireplace: "Griffin no don' touch the feu." (Do you think he's heard that phrase almost as often as "ne jette pas"?)

By the way, not only does Griffin use both languages within one sentence, he has even been known to do so within a single word! The clear example that comes to mind is "Oooors" followed by a person's name, which is an amalgam of "Where is...?" and the French "Où est...?" There's also his name for his stuffed pig, Groink, which seems to combine the English "oink" and the French "groin," both onomapoetic words for the sound the pig makes.

Griffin can also translate simple sentences from English to French (and probably the reverse, though I've never asked him to). If it's just the two of us together, and he says something like "more cheese please," I'll ask him what that means in French. He'll smile his sweet toothy toddler smile and respond, "Encore fromage silty-play."

He also assigns names and titles to things in ways that combine the two languages. For example, he enjoys watching on YouTube a certain classic Sesame Street sketch where Muppets clap and chant "clappety-clap" while they do so. YouTube has titled the segment "Clap, Clap, Clap," but Griffin will point at the computer and request "Tape on the Mains" ("clap on the hands").

And when it comes to singing songs, he is attuned to how a song is "supposed" to go (which can cause some stress as most folk songs' lyrics can vary according to the singer or the book in which the lyrics are printed.) Griffin will interrupt the singer to correct him or her:

And I'll conclude this ever-expanding list with the inevitable toddler mispronunciations that sound like swear words (I still smile when I think about how Carl said "dump truck" before he learned how to pronounce blends like "pr" and "tr"):

Griffin, whenever he sees the mailman, which is facteur in French: "Fucker! Fucker!"

What in the world must they think of this kid at daycare???!!!
Posted by Sarah @ Baby Bilingual at 10:02 AM