It's time for my tutees to learn the French alphabet (and for my four-year-old to stop mumbling "elmo-elmo-pé" when she gets lost in the middle of the song)!  Let's start with some chansons (songs)...

The letters appear on screen, along with the lyrics at the end of the song: "Maintenant je les connais/Toutes les lettres de l'alphabet."

This one, from the website Le monde des petits, has a child's voice singing the alphabet and gentle synthesizer music; it's the one Gwyneth likes best (she actually sings along, and she's very picky about that sort of thing):


The lyrics end a little differently: "Maintenant je les connais/Chante avec moi s'il te plaît."  This 20-minute video continues with a catchy animated song about the numbers 1-10, assigning a rhyming characteristic to each of them ("le sept aime les chaussettes"), and then includes a second alphabet song after the numbers, this one like a lullaby.

My favorite French version of the traditional alphabet song, however, is the accordion-spiced ABC & 123 Cajun from Michael Doucet (founder of the popular group Beausoleil).  Unfortunately, no one has made a cute animated video of it or posted a live version on YouTube, so for now, listen to the promotional clip (#7) on Amazon (and consider buying the album, Le Hoogie-Boogie, Louisiana French Music for Children--it's delightful). 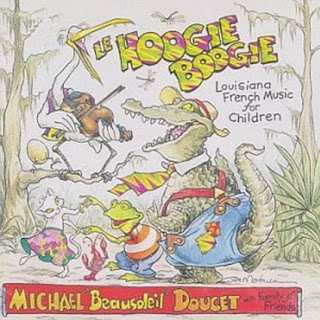 But why limit ourselves to the usual versions?  You might like some of these fun, less-traditional French alphabet songs:

The lyrics are simple: multiple repetitions of the alphabet, each followed by "c'est l'alphabet en français."

You will probably recognize this next melody for the alphabet song: it's the aria "L'amour est un oiseau rebel" from Bizet's Carmen.  I think it's genius!


A nice change from the major-key alphabet songs is this one; it's simply a different melody with those same 26 letters:


Ditto (the exact song, but this video features barnyard fowl rocking out):


This next video introduces each letter of the alphabet, accompanied by a drawing of an animal that begins with that letter.  The singer/narrator pauses just long enough for the viewers to repeat after him.  I like that the animal names appear onscreen, and especially that not all of the creatures are the ones you'd expect.  (Cigogne for C, for example, rather than the more common chat, chien, or cheval; and not an éléphant but rather an écureil for E.  And who doesn't appreciate a good "N is for narval"?)


And if you like learning a word along with each letter, then you should check out Les Alphas, a video introducing the alphabet via characters shaped like the letters.  Each one represents the sound(s) that the letter makes.  Some are cute (the dame and her extremely ample derrière) and some confusing (you'll think the C looks like a chenille, but it's actually a cornichon, while the N, which is supposed to be a nez, looks like the love child of a champignon and a crotte).  I also can't help thinking that the jet d'eau looks too much like a sperm.


(Did you notice the limace for L?  Whose idea was it to make its mascot a slug?!)

I do wish each of the words were written onscreen--especially since it appears that this video is part of a program for teaching (French-speaking) children to read.  Curious to see more?  Check out this clip that focuses on the vowel sounds and this one that introduces the back story of the planète des Alphas.

Now, take a trip back to the 1980s with Chantal Goya and her live-action on-stage spectacular featuring  little girls in matching sailor suit dresses; larger-than-life chickens, cats, and an egg with limbs; and Madame Goya herself with such a sweet voice and such large shoulder pads, gently encouraging us to "Apprends l'alphabet en chantant" :


(This video is simultaneously horrifying and enthralling, isn't it?  I bet you couldn't look away from the singer and her sprightly, singing, head-tilting minions.  I'm so sorry for inflicting this earworm on you!)

So…which one is your favorite, and why?  Which one(s) would you be happy to never hear again?