so what does Griffin think about learning Spanish?

After such a positive start to his Spanish immersion preschool program, Griffin has continued to make occasional comments and ask questions that show his awareness of the mix of languages swirling around him.

"Why is Pioneer [the school] so Spanish?"

"I can't sing the adios song to you because I don't know the words yet."

[To a stranger in the grocery store] "I'm going to be trilingual!"

"Maman, why do you only speak French to me?"


Griffin: "We sang Je suis une pizza at school today!" [This is one of Griffin's favorites; it's by Charlotte Diamond.]
Daddy: "You sang a French song in Spanish class?"
Griffin: "No, silly Daddy!  We sang it in Spanish."

I've also started reading books in Spanish to him--my husband has never studied Spanish, which means that my several iterations of Spanish I and II over the past 20 years make me the default expert in our casa.  (I'm not thrilled about this, because my Spanish is weak and because every time I use Spanish with Griffin is time that I'm not speaking French with him.)  (Plus, I don't pronounce the R and RR correctly in Spanish--they come out very Gallic--and when Griffin repeats Spanish words after me he makes them sound French too!  That, though, will certainly change as he spends more time in his Spanish immersion classroom.) 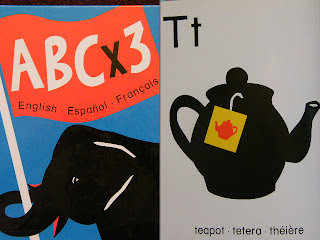 Each page shows a picture of an object that begins with the target letter in all three languages (including the LL and N that exist in Spanish but not the other two).  Sometimes the words are similar, sometimes not.  Some of them are actually spelled exactly the same in each language, which Griffin picked up on right away.


He even notices diacritical marks!  On the A page, he saw that the French "avion" becomes "avion" [imagine an accent mark over the O] in Spanish.  "Look, Mom!  In Spanish, 'airplane' has an accent aigu!" (Ah, if only more of my college students had shown this eye for detail and excitement about spelling.)

Can you tell that I love, love, love watching Griffin's linguistic developments and discoveries?  Yep, these 4+ years of speaking to him exclusively in my non-native French have been worth it!