a new capitulo in Griffin's life

Griffin has just started preschool at Escuela Bilingue Pioneer, a public bilingual immersion elementary school which also offers preschool classes.  (Some of you may recall that we spent a year on Pioneer's waiting list before finding out that they'd have room for him starting this fall.  Now that's he's a preschool student there, he's guaranteed a spot in one of their kindergarten classes, all the way through fifth grade.  And, quite fortuitously, this school is only three blocks from our house, while our assigned "neighborhood" school is clear across town!)

At the preschool and kindergarten levels, the teachers use only Spanish with the children, who are a mix of native English speakers and native Spanish speakers.  Griffin has been remarkably, surprisingly nonplussed about the immersion experience.  Take, for example, this exchange after his first day:

Griffin: Maman, I didn't understand what the teachers were saying because they were speaking Spanish all the time.
Maman: Ah bon?  ça va? [Oh really?  Was that okay?]
Griffin: Oui, ça va. [Yes, it's fine.]
Maman: Tu voudrais y retourner demain? [Would you like to go back tomorrow?]
Griffin: Oui!

It helps, of course, that the classroom is full of centers with activities that Griffin loves--books, manipulatives, and so forth--and a few new things, like Coco, the pet mouse.  This led to Griffin's very first trilingual sentence:

"Maman, the ratoncita was scared of all the people so she stayed in her petite maison!" 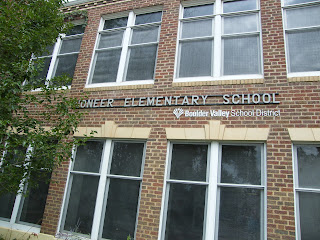 Oh, I am a madre orgullosa of my hijo, muy orgullosa!  This is going to be quite an aventura.
Posted by Sarah @ Baby Bilingual at 5:07 PM