a new chapitre in Griffin's life

Chapter books!  So far my husband and I have only read picture books to Griffin.  But seeing how much he enjoys re-reading certain ones--the Knuffle Bunny series in English, T'choupi in French--and how he responds well to authors with very distinctive styles--such as Robert Munsch in English or in French translation--and how he loves to see familiar characters in new books, like the Berenstain Bears or Benjamin--all this makes me think that he's ready for longer books that would permit him to follow characters during longer story arcs.

My mom, nostalgic for the days when she and my dad read me Sandburg's The Rootabaga Stories and Laura Ingalls Wilder's books, tried reading Little House in the Big Woods to Griffin last year.  It couldn't keep his attention, though, and rather than forcing him to listen, she graciously set the beloved tome aside.

Now, though, he's 4.5 years old, and I really like the idea of sharing a great children's novel with him, one chapter a night, so last week I decided to start.

But then I had to actually choose a chapter book in French!  I have very few of those (we've amassed a respectable collection of French picture books, and I have short stories and novels from my teaching career and graduate school, but not much in between).

For lack of better options, and because Griffin connects better to stories about boys (or anthropomorphized animals who are males) than those about girls, we started Le petit Nicolas by Sempe & Goscinny (the first in a series of books, published in 1959, and well beloved throughout the francophone world). 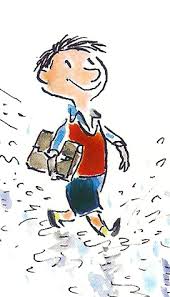 Griffin adores books so much that he will gladly listen to someone read him the cereal box, so he was very open to the idea of having me share with him this chapter book about a mischievous little boy and his adventures with his friends at school.  (He's disappointed, though, that the illustrations are limited mainly to small black-line drawings every couple of pages.)

We're about five chapters in--the chapters aren't too long--and I'm already seeing that this perhaps wasn't the best choice for our First Chapter Book In French: each chapter is like a self-contained short story with a plot that doesn't extend into the following chapter (though the characters recur).  The characters are all referred to by their last names, which are completely unfamiliar to my son, and which perhaps makes it harder for him to relate to them.  Plus, a lot of the scenes take place in a school from a couple of generations ago.  As Griffin has only been attending a touchy-feely preschool two days a week--in the US--the concept of an elementary-school-level all-boy classroom (boys who hit each other regularly, no less) with an unsympathetic teacher and a surveillant (kind of like an attendance officer) is far beyond his realm of comprehension.

Of course, that's the beauty of literature, that it can show us other worlds that we haven't experienced, and I do want Griffin to learn about French culture.  But still, I'm not sure if Le petit Nicolas is the best tour guide!

What do you think?  What chapter books in French would be appropriate for an American four-year-old?  Which ones (in English or French) have your children enjoyed the most? 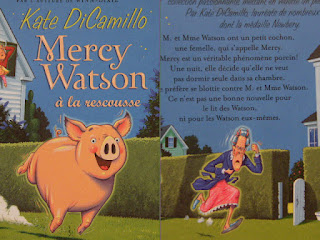 UPDATE (August 31):  At a library far afield, we found a French translation of one of the Mercy Watson easy chapter books by Kate DiCamillo.  In this one, Mercy Watson a la rescousse, the cheerful, toast-loving porcine protagonist leaves the house in search of food and returns with two helpful firemen and two spinster neighbors.

This popular series (six books so far) serves as a transition between the longer Easy Readers (like Frog and Toad or Amelia Bedelia) and traditional chapter books, which are more intricate and have fewer (if any) illustrations.  As you can see, the Mercy Watson books offer large print, lots of white space on the page, and drawings, making them especially appealing to young readers: 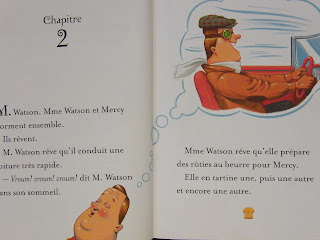 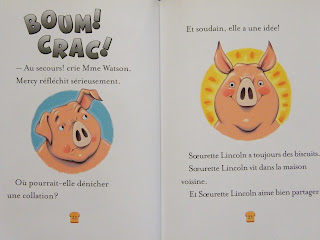 The chapters are short enough that we read two or three at a time and finished the book in less than a week.  Griffin seemed to like it better than Petit Nico, but he still asks me to read to him from the latter as well!