who knew spelling could be so cute?--and other cool French apps for kids

Dictee Muette Montessori ($3.99): A French spelling game with four different levels (including one that targets specific sounds of your choice), three different scripts (uppercase, lowercase, and cursive), and several hundred words.  You see a picture, hear its name, then drag and drop the letters to spell out the word pictured.  When you have successfully completed the word, you see a fun animated fireworks-type display, which you can interact with by touching the screen.

When you tap a letter, you hear its most common pronunciation; as a result, Griffin has learned to spell words (lac, lavabo, etc.) that he wouldn't have even been able to read otherwise!  He has also started paying attention to diacritics thanks to this game.  (Hearing an anglophone four-year-old earnestly ask if cafe has an e normal or an e accent aigu means that I can honestly say that I find orthography adorable now.)

My First French Words ($1.99): Another French spelling game with multiple levels and different scripts.  This one is even more appealing to emergent readers: at the easiest level, it provides the spelling of the pictured words and "cards" showing the letters of the word out of order.  You simply drag and drop the cards over the on-screen letters (unlike Dictee Muette, where you must choose from the entire alphabet).  Levels two and three also show the letters out of order (but you have to recreate the word).  This game separates the words into categories--animals, foods, and colors--and covers fewer words than Dictee Muette.

Griffin really likes the (wordless) puzzle apps from this developer, by the way.

J'apprends les petites lettres ($2.99): This app encourages children's passive knowledge of letters: rather than asking kids to spell words or produce something, they learn to recognize letters as they trace, identify, and listen to sounds produced by the letters.  One nice touch is that the word that represents each letter's sound actually resembles it--the araignee (spider) looks like the lowercase "a," the coquillage (seashell) is in the form of a "c."  An animated kangaroo cheers on the kids as they progress through the game.

So far, we have only used the free version of his app, but I expect to purchase access to the other 23 letters the next time Griffin needs to be bribed to do something.  (Actually, he sometimes gives me his own money to pay for an in-app purchase!)  Apparently, two games--matching and memory--come with the full version.

A major downside of this activity for anglophone kids, by the way, is that it features French cursive lowercase letters, and if you don't trace them perfectly a la francaise (starting and stopping only in the approved places), you can't continue to the next screen.  Since French handwriting various from American in several important ways, this might confuse students.  (At least, it frustrated this grown-up American--"But that's not how I learned it!")

This developer, Hachette (a huge French publisher), also offers Les grandes lettres, which appears to be similar to the above--with capital letters instead of lowercase--but perhaps not quite the same, based on the screen shots on their website.

French numbers ($4.99): This app eschews bells and whistles (and excitable roller-skating kangaroos) to focus simply on recognizing numbers.  You choose the mode--in "listen," you type the number you hear, in "speak" you type a number and the app pronounces it, and in "read" you look at the number spelled out in words and then type the number.  The free version goes up to 42 (hi Douglas Adams!), but if you pay for the full version (which I didn't), you can practice much larger numbers (just in case you need to, say, count to a million in French to impress a cute guy).

(I don't know who that guy would be.)

A fun feature of this app is the choices that it offers: you can select the range of numbers you wish to focus on, for example, and whether you want to hear them pronounced as in mainland France or as in Quebec.  I think this would be a great app for students learning French numbers--we English speakers really need a lot of practice to get comfortable with concepts like 77 (soixante-dix-sept, or 60+10+7) and 99 (quatre-vingt-dix-neuf, or 4x20+10+9).  But the app doesn't really appeal to Griffin.

Erasmos, the developer, also has a version of this app for other languages (Spanish, Italian, German, and Russian), alphabet apps for these languages (with a similar approach to the numbers app, but with games for practicing), and even a French Gender app (which would probably be useful for students averse to dictionaries as well as for those who want to figure out the patterns for predicting whether French nouns are masculine or feminine).


According to Bayard's website, this app reinforces information that children should be learning in preschool, and the difficulty adjusts itself according to how many correct answers your child achieves in each exercise.

And there appear to be other educational apps from this developer that I really want to try now with Griffin, covering animals and their ecosystems; math (counting and adding); letters, syllables, and spelling; and school readiness activities.

Please do note that these Bayard apps are designed for children who are already familiar with much of the relevant vocabulary--the apps bring together the expressions and the ideas they represent in interactive, meaningful ways.  While these activities would probably be frustrating for young children who are just startng their exposure to French, they would be marvelous for older learners, including adults--they permit students to practice the vocab in context--so much more fun than stilted fill-in-the-blank exercises in a workbook!

I'm also gathering links to these and other apps on my Pinterest boards.

What are your favorite smartphone/tablet applications in French or English for children? 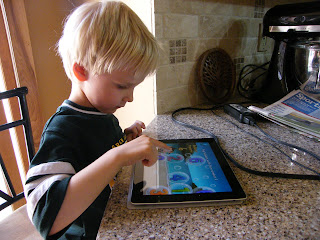