At seven months old--and so curious about the world around her that she only grudgingly accepts to nap lest she miss out on something exciting, like Griffin knocking down yet another tower, Daddy blowing his nose, or Maman making a cup of tea--Gwyneth is definitely ready for us to use baby sign language as we speak to her.  Grinning and squealing and reaching out to grab us, she pays close attention to our faces and our hands when we address her.

When I say "we," I mean my husband and me, but also her four-year-old brother.  So far, Griffin is showing a lot of interest in the signs; occasionally, I'll even notice him making a sign as he talks to someone besides the baby!  He and I review the signs in the car and over meals, mostly, and the three of us watch a few minutes of a baby sign DVD each night, so that we're not trying to learn too many signs in a short period of time.

[Update: On March 15, we were practicing the baby signs at dinner in a local restaurant.  We had just worked on please, thank you, and sorry when I caught Griffin picking his nose and ingesting the results.  I snapped at him, and before he mumbled his usual "Sorry I won't do it again," his hand came up to his chest and he made the sign for "I'm sorry"!]

What really makes me happy is that Griffin is seeing--experiencing, in fact--that he now knows at least three ways to convey a (simple) idea.  He can use English, French, sign language, or a combination thereof, depending on his interlocutors, understanding instinctively that one object can have many labels.   If all goes well, this will be a "duh!" concept for Gwyneth too.

And I really like the idea that the baby sign language can be a bridge between English and French as she's acquiring language.  If her daddy and brother squeeze their hands and say "milk," and later I make the same gesture as I announce "lait," then the meaning of the word is reinforced without our ever having to explicitly translate it for her.

Plus, encouraging Griffin to sign to Gwyneth should help develop a stronger connection between them and give him a reason to speak French to her!  (His language of choice is currently English, but with a little encouragement will switch to French.  But I'd rather have him speak French spontaneously, of course.)

Here's what I really want: a free video (eg, YouTube) or inexpensive iPad app of children demonstrating American English baby sign language while a narrator explains the gestures in French.  Because sign language varies from country to country, native-French baby sign instruction would not necessarily mirror what we're using (baby sign language adapted from ASL, American Sign Language).  But if the video or app were narrated in French, then Griffin and I could watch it over and over and practice together.  (Since I only speak to the kids in French, I don't want to waste our non-Daddy time watching TV or movies in English.)

Any suggestions for ASL-based baby signs explained in French???  What are your other favorite baby sign resources?  We really like the Baby Signing Time DVDs (which we've been borrowing from the library).  I also picked up these iPad apps:  babysign (I love the alphabetical list --it's easy to select a word and see the sign for it), which unfortunately shows British English baby signs (which seem to vary a bit from the ASL ones), and Sign Shine, with video clips of someone signing to ten familiar children's songs. 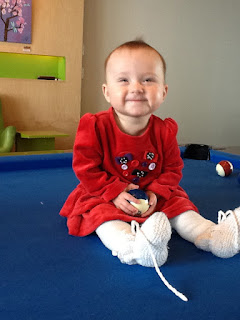