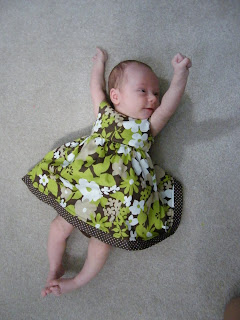 I have created French-inspired nicknames for three of the most important children in my life, and did so without even thinking about it.  Their nicknames appeared organically and just fit them!  I have realized that having such a nickname is important to me because all of their given names are quite anglophone, which kind of interrupts the flow when I'm speaking French to them.

Carl: I called my nephew "Carlicot" (don't pronounce the T) because "Carl" seemed like a  very grown-up name for such a little guy.  The extra C brought with it fun alliteration, and the diminuitive ending -ot rounded the sound of it, evoking French nicknames (Pierrot, Jacquot) as well as a cheerful red flower (coqlicot).

Eleanor: Family members dubbed my niece "Ellie" early on, so when I noticed her fascination with a wind-up music box on top of which ladybugs (coccinelles) spin, it was an easy jump to "Coccinellie."  It's hard not to smile when you say it aloud: Coccinellie!

Griffin: Because of his mighty roar (well, mighty for a newborn), my husband and I thought of our baby boy as a bear or a lion.  In French, amour is love and ourson is a baby bear, so I combined them to turn him into Amourson, my "love cub."

But nothing has come to mind for Gwyneth!  I'm looking for a French-ish, appropriate, affectionate nickname for my little girl (even though her name isn't French at all and thus would be pronounced "gwee-net," which doesn't roll trippingly off my tongue).

Please help!  I'll even award a prize to the person who suggests a name that I adopt!

Here's what you need to know about her:  she's still small (not even nine pounds), her disposition is sweet (although she spits up more in one day than Griffin did in his entire infancy), she appears to enjoy music, and she has dark blue eyes and brown hair and very long fingers and toes.

Anyone have an idea?  Even if you don't, please comment and share your nicknames for your young'uns, whether they bridge two languages or not!
Posted by Sarah @ Baby Bilingual at 10:09 AM

Email ThisBlogThis!Share to TwitterShare to FacebookShare to Pinterest
Labels: Gwyneth