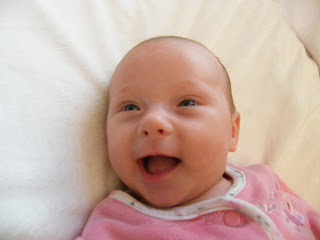 No, not Gwyneth yet.  She's just cooing. 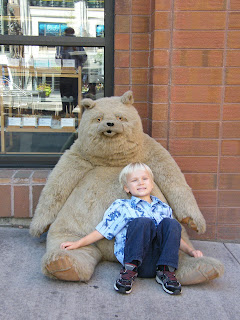 It's Griffin!
Perhaps he's been doing this all along, but lately I've noticed how skillfully he handles mystery words.  If he doesn't know the appropriate word in French (or English), he substitutes a short (or long) description of the item or idea, in whichever language seems most convenient (usually both, if he's talking to me, but he also doesn't hesitate to throw in a French word or bust out his creative Franglais with others).

Oh yes, I have a few examples!

Out for a Saturday morning walk, we passed a house with several tree stumps in its front yard, and I realized that I didn't know how to say "stump" in French. I told Griffin that we'd have to look up the word in the dictionary when we got home. But several hours later, my sleep-deprived brain couldn't remember which word we needed. Griffin reminded me by saying, "L'arbre que quelqu'un a coupé et quelqu'un a laissé qui est petit" (the tree that someone cut and someone left behind which is little).

Another time, Griffin was telling his daddy that he wanted dessert from the freezer, but he could only remember the French word (congélateur), which didn't make sense to my favorite Anglophone. Barely missing a beat, Griffin explained that he wanted something that was in "the rectangle with a door on top of the réfrigérateur."

A song that we enjoy singing together ends with the line, "Et l'on se taît" (and we shush up). Curious if Griffin understood that idea, I asked him what it meant, and he replied, "It's when on ne parle plus." Wow! "We don't talk any more." Most of my first-year (and plenty of my second-year) college students couldn't use the ne…plus negative construction to convey "no longer" instead of simply "not," and they rarely felt comfortable with the third-person pronoun on which can signify "one," "you," or "we," depending on the context.  It seems like Griffin has simply internalized utterances like these, whereas we adults have to study and memorize them!

The linguistics student in me loves watching him figure out how to communicate, and the non-native speaker in me is thrilled that he's developing these circumlocution skills.  (And the maman in me thinks he's brilliant!)

I am also realizing that some of the games we play--I Spy, 20 Questions--must be helping Griffin learn how to "talk around" ideas and define things.

Now you, dear readers--in what fun ways have your bilingual kiddos circumlocuted? What strategies do you encourage to help them rely less on word-to-word translations between their languages?
Posted by Sarah @ Baby Bilingual at 1:20 PM