French class at the maison--but just for Griffin (for now)

This post was written for inclusion in the May Blogging Carnival on Bilingualism.
﻿ 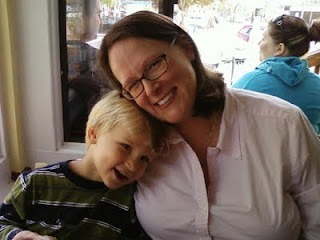 When I began blogging about raising children with more than one language five years ago, I was still teaching French full-time at the university but growing frustrated by departmental politics, student apathy, and the lesson planning and grading that kept me up till midnight some evenings.  Recently married, my husband and I knew that we wanted children and wanted them to grow up with two languages, and I was already using exclusively French with my nephew and working as a private tutor for two preschool girls whose mom wanted them to learn French.

No surprise, then, that for years now I've thought about offering French classes for young children sometime down the road.  But when is "sometime down the road"?  I had thought it might be "sometime around right now"--my son Griffin is almost 3.5 years old, I'm working only part-time at the public library, I co-founded a successful French storytime that has given me more experience choosing materials and working with a group of young children, and Griffin and I have attended two six-week classes of French for preschoolers, which also provided me with lots of ideas and helped me refine what I would (and would not) do in such a class.

In fact, Griffin has been asking me for "French class at the maison" once or twice a week, so we sit on the Tour Eiffel blanket and read, sing, draw, play games, and do worksheets, all in French.  (In other words, we basically do what we would do any other time, but call it French class!)  And for the past year, I've been writing articles for Multilingual Living about French immersion activities to do with young children.

My husband and I even had our basement finished last year with the goal of creating a playroom  to use eventually as a preschool classroom. (However, we had to contort the layout to accommodate the builder's strange decisions for plumbing, the furnace, and the water heater, and we ended up with a narrow, L-shaped playroom that won't be ideal for what I had in mind.)

And now I'm seven months pregnant and utterly exhausted.  We've put the French storytime on hiatus for the summer because even that feels like too much to take charge of these day.  (My co-founder is pregnant too!)  The thought of developing my own class from scratch, finding or making materials, recruiting students, keeping the house clean enough to invite strangers in (or finding another location to rent), and actually running a weekly or bi-weekly class for half a dozen Griffins while pregnant or while taking care of an infant makes me want to run to my bed and hide under the covers!

So while I'm feeling disappointed in myself, I also know that taking care of moi needs to be my top priority; otherwise nothing else will get taken care of either.

In the meantime, I'll keep gathering ideas and materials, figuring out what works with Griffin and my nephew (and soon my niece, who is six months old and appears to enjoy my comptines and fingerplays), thinking about future storytimes, and having fun in "French class at the maison" with my delightful little boy while it's still just the two of us.

Have any of you tried private tutoring or offering classes to young children? What worked and what didn't?  (Here are three examples from two Spanish teachers, Jennifer and Annie, and a French tutor.)  What advice can you offer?  What would you want to see in such a class?  And for inspiration, check out my friend Dory's brand-new French immersion school/daycare for one to five-year-olds in Portland, Oregon, Atlas Academy, where I would send Griffin in a heartbeat if I could!
Posted by Sarah @ Baby Bilingual at 9:23 AM