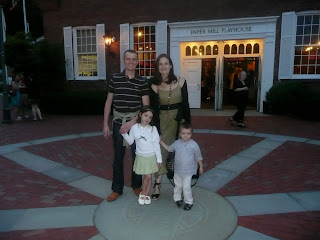 Meet a new member of Bringing up Baby Bilingual's extended family: Franck from France, his wife Cristina from Spain, and their two children, living in the US.  Franck graciously answered my questions--and he has a question for my readers at the end of this profile!  You can also visit his brand-new blog, Early Languages, where he shares ideas for language teaching in ten-minute chunks.

Please introduce us to your family.

My name is Franck. I was born and raised in Alsace, France. I grew up speaking with my parents and friends Alsatian, a German dialect, and learned French in school.  I have lived in the US for 12 years, where I met Cristina, my wife, who is from the Basque Country in Spain. We both work in large retail and consumer goods companies and live in West Orange, NJ. We are passionate about teaching our kids languages.


Elena, our daughter, is six years old. She speaks French with me, Spanish with my wife, and English at school. She loves drawing, ballet and tennis.  Pablo is three years old and is doing the same, although with a more limited vocabulary. He is a big soccer fan.

We all go as a family to Chinese school on Saturday afternoon to learn Mandarin.

What languages are spoken by the adults in your household and at what level of proficiency?

I am a native French speaker and my wife a native Spanish speaker, which makes it easy for us to teach our languages to our children. When my wife and I met, we did not speak each other’s languages, only English. We took classes for one year so that we could communicate with our respective families.

With our kids around, I speak French to my wife, and she answers in Spanish. We speak in English in front of the children when friends are around.

How are you exposing your children to the other languages?

We strongly believe in making every moment in the day together a language learning opportunity. I usually read at least one ten-minute story a day in French. When I cook, I like to have one of the kids with me to explain the vocabulary in French. When we play soccer, I make an effort to talk a lot about how to play in French. In the car I only put French nursery songs.

Why do you want your children to know more than one language?

We believe that learning is fun and we want them to communicate easily with their grandparents in Spain and France. It will also give them broader opportunities in the future to build relationships with people. And we believe that speaking more than one language will help build a more peaceful world.

How have you been able to expose your children to the cultures where French and Spanish are spoken?

What resources and activities have been most useful to you? What, on the other hand, has not been useful?

Useful: a lot of books, audiobooks in French, iPod and iPad. Playing with dolls and playing soccer also makes it fun and interactive. A lot of songs in the car. Watching a cartoon in French on YouTube five minutes per day.

I believe everything can be a useful activity if you weave in some language learning.

What challenges have you faced as you raise your children multilingually?

Finding the time. We both work full time away from home. The first one comes home at 7:30pm at the earliest. The market share of French is limited at home, and I need to find every possible opportunity to squeeze some French in.

Do you have any advice for us--for example, how do you encourage your children to use the minority/second language, or how do you cope with family members who don't speak the child's second language?

Reading princess stories in the second language works the best with my daughter, and also playing together with her dolls or puppets in French. It makes it interactive.

When my in-laws are in town, they do not understand French. So I tell things to Pablo and Elena in French, and translate it right away in Spanish. I basically tell them things in the two languages so that my in-laws do not feel left out.


If any of the adults in the household are non-native speakers of the language they use with the children, please tell us a little about how that works for your family.
My wife and I made the commitment to learn each other’s language. That was the biggest step I believe that helps us raise trilingual children.

We continue maintaining our languages. I read novels in Spanish, my wife in French (mainly on days off or on vacation). Vacation with our families is also very helpful

What do you think parents, caretakers, teachers, and/or researchers need to know about teaching a second language to children? What do you wish you had known when you started? What, if anything, would you do differently now?

I am in the process currently. However, I like to read a lot about other parents’ experiences, I learn a lot from it.  Using the iPad, YouTube, a story in French every night, CDs in the car are all ideas I got from friends.

Answer your own question now--what did I not ask about that you would like to comment on?

I would like to know if parents have used the second language to learn a third one. I am trying to teach Chinese to my son with a French method. I would like to talk with parents who have tried it and how they did it.

Readers, parents of multilingual children, do you have any suggestions for Franck as he uses his children's second language to help them learn a fourth?

I'd also like to highlight his candid statement that when both parents work long days, it is very hard to give the children lots of input in the minority languages.  When I gave a conference presentation earlier this year about raising children with more than one language, I asked the attendees what they found most challenging about the process; most of them felt similarly constrained.  I know I'm very lucky to be working part-time and spending half my weekdays immersing Griffin in his second language.  Kudos to you single parents and parents who both work full-time who still manage to enrich your children's lives with two or more languages!  And Franck, thank you for sharing your story.
Posted by Sarah @ Baby Bilingual at 10:15 PM