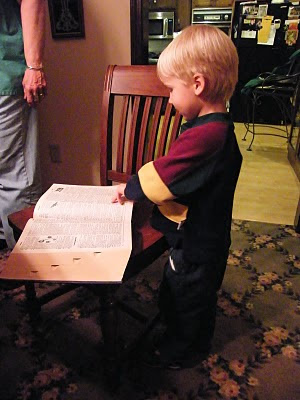 You know, I've bombarded dozens of people--mostly strangers!--with my questions and then published profiles of their families on this blog; but while I have probably answered a lot of them myself along the way in the 4.5 years I've been writing here at Bringing up Baby Bilingual, I've never actually written out answers to my own questions all in a row.

And, well, I'm not going to do that now either. But one of the students who volunteered with my Reading Buddies program is now a student at Colorado State University, where I used to teach, and she contacted me because she's doing a paper on bilingualism for her English class. So as long as I was typing answers to her questions, I may as well share them here!

1. What made you decide to raise your son bilingually? What advantages, if any, do you hope this will give him, and are there any disadvantages which weighed against those?

So many reasons and advantages! For example,

• Facilitate travel, future study abroad opportunities, and career possibilities
• Develop an awareness of and interest in other countries and their inhabitants
• Train the brain to make it easier to acquire other languages and to be able to better understand how languages work

Disadvantages? It takes a lot of effort on my part, almost certainly more than it would if he were being raised monolingually, and I occasionally get funny looks or nosy questions when we're in public together. (Just two days ago, someone asked me, "Is your son adopted?" She couldn't fathom any other reason why a parent would choose not to speak English with her child in the US.) Also, as Griffin grows up and can communicate better, my monolingual husband has more and more trouble understanding us when we speak French.

To me, though, these are all minor drawbacks. It helps a lot that my husband, my family, and my in-laws are all very supportive of our raising him bilingually.

2. Living in an English-speaking society, how do you promote the French language in your son's upbringing?

• Read copious amounts of books and magazines in French (purchased at conferences, yard sales, eBay, online, and more)
• Translate books and songs from English to French for him
• Play lots of music in French (CDs, Radio Ouistiti)
• Sing to him and recite nursery rhymes in French
• Watch DVDs, videos, and YouTube clips in French
•Play games online in French (see the category "French Language for Kids" in my sidebar)
• Attend a weekly French playgroup
• Attend a French storytime (granted, we've only been doing this for less than two months)
• Hire French-speaking babysitters (this has been with limited success, though one of the three did have a French mother and thus a beautiful accent)
• Invite French-speaking friends to spend time with us and make sure that they do speak French with me around him
• Research to learn about additional resources and to establish contacts with other parents raising children with French and English in Anglophone countries (in other words, write this blog)
• Use Skype to communicate with Francophone friends (okay, so I haven't actually done this yet, because it's hard to motivate Griffin to sit still and converse in front of the computer)
• Dream of family vacations to Francophone countries (some day!)

3. Do you encounter challenges in parenting greater/other than you would expect with a monolingual child?

I have spoken exclusively French with Griffin since he was born. It's very challenging to be a non-native speaker of the language I use with my son for two major reasons:

I'm simply not as fluent in French as in my native language, English, which means that I am regularly searching for words and phrases to express ideas that I never needed to say before becoming a parent (such as "He had a diaper blow-out on his onesie while sitting in the bouncy chair"). Also, since I stopped teaching when he was born, I am no longer around other French teachers very often, and I miss speaking French to grown-ups on a daily basis.

And in a way, I have rejected the intimacy that comes from sharing one's native language with one's child. No matter how I try to translate the songs, books, and rhymes from my childhood, they're just not the same when rendered in French, so he will never love them the way I did. The lullabies I sing him are now dear to my heart, but it took a year or two for me to feel that way. The sweet nothings I whisper in his ear are always in French. It doesn't always feel natural.
On the other hand, since I have to deliberately think about French when I talk to my son, it means that I am perhaps more present for him, attending more, reflecting more. And this brings with it a different sense of intimacy because I have chosen--and continue to choose--to speak French with him. We communicate carefully, actively, lovingly, even though it's my second language.
But it will be his first!
Posted by Sarah @ Baby Bilingual at 6:09 PM