Meet Tracy, who shares an inspiring story of how her dedicated efforts to raise her daughter bilingually have resulted in a toddler whose stronger language is French, even in the deep South, even with a parent who is a non-native speaker! 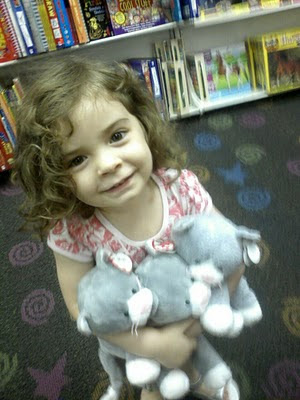 Introduce us to your family--
• Parents'/caretakers'/adults' names, occupations, nationality—Parents are Steve, an American writer and English professor, and Tracy, a SAHM and freelance writer/editor with dual U.S.-Canadian citizenship.
• Kids' names, ages, interests—Colette, who will be three in December, loves painting, swimming, animals and anything train-related.
• Where you currently live—Jackson, Mississippi
• Other countries you've lived, if applicable—Canada (Quebec)
• Anything else relevant? I (Tracy) lived in Montreal for a decade then worked at the French Embassy in Washington, DC, for four years.

What languages are spoken by the adults in your household and at what level of proficiency?
English (both native speakers) and French (Tracy only—I will only claim near fluency, as my experience raising Colette to be bilingual has really taught me how much French I still have left to learn!)

What languages are you exposing your child to, and how?
Steve speaks to Colette in English and I speak to her in French. We own many French books, CDs and DVDs, and we have a babysitter who speaks French (as her second language). I have also managed to hire native French-speakers to hang out with us occasionally (I wish I could do that more, but francophones are a rare commodity in this part of the country).

Why do you want your child to know more than one language?
I believe speaking more than one language allows a person to feel comfortable in more places and connect with more people. I believe that bilingualism promotes open-mindedness and intellectual curiosity, two qualities I value highly. I worked so hard to learn French; I love the idea that I can give my daughter the gift of learning the language with ease.

And then there are all the cognitive benefits! There’s a really interesting article about the latest research findings here.

How well does your child understand and speak the different languages?
French is Colette’s default language at this point, and she is considerably stronger in French than in English (although her English isn’t bad). Until recently, she thought everyone spoke French (except maybe her dad), but she has started to address people in English. Her comprehension is excellent in both languages. What astounds me most is that she seems to have developed a fundamental understanding of French grammar that still eludes me sometimes.

How have you been able to expose your child to the cultures where French is spoken?
Only through books, CDs and DVDs at this point. We’re hoping to enroll Colette in a weeklong immersion camp in New Orleans next year and to travel to France with her the following year.

What resources and activities have been most useful to you?
Books, of course, are invaluable.

DVDs are fantastic, since they allow Colette to hear conversational French spoken by native speakers (we use VLC to play Region 2 DVDs). She’s a big fan of a cartoon donkey named Trotro. The CDs of a children’s singer named Alain Schneider are fun, clever and great for expanding her vocabulary (mine too, for that matter). One song, for example, might contain a dozen synonyms for the verb “walk.” I also subscribed Colette to a magazine called “Popi,” which she really likes. She’s thrilled to receive something in the mail every month, and the pamphlet for parents that comes with each issue helps me pick up parenting vocabulary. It’s expensive, but worth the cost. Two books readily available in the U.S. are among Colette’s favorites and have been since she was tiny—Usborne’s First 100 and First 1,000 Words in French. Generally, however, I tend to avoid French-as-a-second-language books in favor of books aimed at native speakers.

Another great free resource is Radio Oustiti, an online radio station that plays good music, airs stories, and offers activities (we just heard a short piece on arctic animals and were able to download a pdf of the animals mentioned). Colette already calls out "Ouistiti!" when I put it on.

In terms of my own French, wordreference.com—especially the forums that allow you to get feedback from native speakers—is a lifesaver.

What do you think parents, caretakers, teachers, and/or researchers need to know about teaching a second language to children?
Immersion is best. Don’t lapse into English—be it for your own comfort or someone else’s.

What challenges have you faced as you raise your child with more than one language?
My greatest challenge is the lack of a French-speaking community and related resources where we live. It is extremely expensive to order books from France or even Canada. I’ve had some luck buying books on eBay, but the selection is limited. I have searched high and low for another French-speaking child, with no luck. Because I have been unable to find a French-speaking community here, I worry that Colette’s French will rapidly fade into the background once she starts preschool next year. I have heard time and again that children start to reject the minority language at a certain point; hopefully this child will be different.

My other big challenge is my own imperfect French; it can be frustrating when you’re trying to explain something to your child and you keep second-guessing yourself about word gender or placement.


Please tell us a little about being a non-native speaker of the language you use with your child.
I always have both a French dictionary and a French-English dictionary close at hand, and my purses and pockets are filled with scraps of paper covered with words and grammar questions to look up. As I said above, wordreference.com is invaluable. If Colette brings me an English-language book, I read it to her in English; my early attempts to translate as I went were too pathetic. And besides, it’s a real joy to share books like The Cat in the Hat with her in my native language.

Do you have any advice for us?
I have been fortunate in that everyone in both my and my husband’s family has been extremely supportive, even though none of them speak French. Early on, I would switch into English in front of other people because I felt it was rude to say things to Colette that they couldn’t understand. Now I don’t worry about that. My approach is to be up front with people about what I’m doing and then just go about my bilingual business. I’ve found that most people are really impressed when they hear a two-year-old speak a language they don’t understand! If you come up against any naysayers, send them the link to the article mentioned above.

Answer your own question now--what did I not ask about that you would like to comment on?
If anyone knows any French speakers within a reasonable driving distance of Mississippi, please send them my way!

Sarah here--so much of this resonated with me that I'm getting dizzy with all the nodding, from the cost of buying French children's books to the amazing helpfulness of the native speakers on the Wordreference.com forums to her advice not to to worry about what the monolinguals think when they overhear you speaking another language to your kid. Tracy and Colette are proof that you can raise your child bilingually wherever you live, whatever your native language happens to be! Tracy, thank you so much for answering our questions and letting me profile your family here.