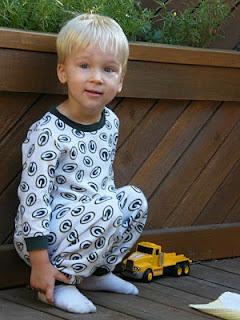 Dropped Griffin off at daycare this morning, put three extra pairs of underpants and shorts in his cubby (we're on day 10 of toilet training), and then found out that they're moving him up from the toddler room to the preschool room. This suprised me--he's only 2.5 years old!--and then I was suprised by how close I was all of a sudden to tears.

The teacher reassured me that he's showing all the signs of being ready to transfer to the older kids' room, that they'll do it gradually, that if he doesn't respond well they'll keep him with the toddlers for a few more weeks...but still! I mean, this is my baby we're talking about.

But I have to admit, I've noticed him growing and developing by leaps and bounds. The potty training, yes, but also learning to turn somersaults, climbing on furniture he couldn't reach before, drinking from a non-sippy cup with less spillage, that sort of thing. Plus, the boy is tall! People never guess his true age--they always think he's older.

And his language! It keeps exploding! Especially his English! His sentences get longer and longer, he uses irregular past tense verbs correctly, he even hears himself say something ungrammatical and fixes it himself occasionally.

And it's not just the grammar: he keeps inventing with language. He regularly makes up new song lyrics (like a recent lullaby to his own feet) and tells jokes (or rather, says things just to be funny). He can carry on monologues, like after his nap, observing and commenting and reminding himself of things; sometimes the monologues turn into dialogues as he converses with a doudou (stuffed animal) and changes his voice for the giraffe's reply!

He spends a lot of time playing with trains and balls and blocks, but he still reaches for a book first thing in the morning. Ed has to be at work early, so he'll scoop Griffin up and drop him in our bed on his way out the door, and Griffin and I read together even before we have breakfast. We read all day long.

Just yesterday he astonished me by asking for the story about les animaux (the animals) who want to attraper (catch) the singe (monkey): I had no idea what he was talking about until he brought me an anthology with a story in French about that highly pursued monkey which we had read one time. Over a month ago. And never discussed again.

I love age 2.5! Maybe that's why I'm reluctant to see him "graduate" to preschool--everything right now is so dang good I don't want things to change. 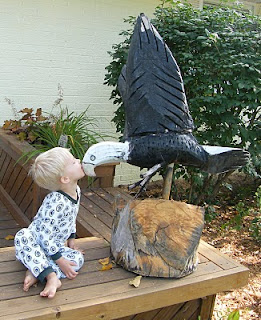 Email ThisBlogThis!Share to TwitterShare to FacebookShare to Pinterest
Labels: Griffin