Profile: Portuguese and Spanish with Marcela's family in the US 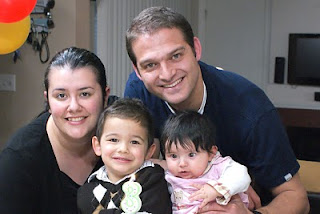 Please welcome Marcela into the Bringing up Baby Bilingual family. She kindly answered my questions about raising her children with Portuguese and Spanish in the US--no English yet at all! I know some of you are also focusing on the minority language(s) at home to ensure that your children have a strong base before they start school and are bombarded by the majority language. Marcela and I would love to hear about your strategies and challenges and choices--please share them in the comments below! Thank you, Marcela.

Introduce us to your family--
• Parents'/caretakers'/adults' names, occupations, nationality--We're the parents--Edson and Marcela. Edson is a dialysis tech at our local hospital and working on his RN degree which he'll thankfully get at the end of this year! Marcela is a SAHM that also works part time from home. Edson is Brazilian and Marcela is Chilean.
• Kids' names, ages, interests--Our kids are Lucas (3) and he LOVES anything that has to do with trucks, trains or dirt. Gabriela (Gabi) is 8 months old and she likes playing with her brother's toys and hanging out with mom.
• Where you currently live--Provo, Utah
• Other countries you've lived--Edson has lived in Brazil and I have lived in Brazil and Chile.
What languages are spoken by the adults in your household and at what level of proficiency?
We both speak Spanish and Portuguese fluently but Edson says his Spanish is "Portunol" than pure Spanish. His Spanish is good, it definitely gets him by, but it's not grammatically correct all of the time. However, when we're both home, we speak in Portuguese to each other. I learned English in school. I went to ESL classes from Kindergarten all the way through 5th grade. By that time (5th grade), I was only going to my ESL class for an hour and the rest was all English. I was pretty fluent by then and was able to test out. Edson learned English by speaking to Americans in Brazil. He worked with them in Brazil but his vocabulary was very limited to his work. Once he got here, he was able to fully pick it up.

What languages are you exposing your children to, and how?
I speak only Spanish to the kids and Edson speaks only Portuguese to them. When Lucas watches TV, it's usually Spanish cartoons, and his Disney movies are all in Portuguese. He also gets some exposure with English whenever he goes to Church or plays with the kids outside.

Why do you want your children to know more than one language?
Aside from the obvious reason of helping them in their future, we both feel it's very important for our kids to be able to communicate with their family. My parents don't speak English and neither does anyone in my husband's family. I have a brother that only taught his kids English and they aren't able to communicate with my parents and I think it's a true shame to not be able to do so.

How well do your children understand the different languages? Do they have a preference for what they speak in which contexts? How has their language use evolved as they grow?
Lucas understands and speaks both Spanish and Portuguese really well! He mixes very few words from one to the other but the amazing thing is that he knows which language he needs to speak with whom. I've noticed that when Lucas is playing by himself, he talks to his cars in Portuguese. So I'm guessing he has a preference for it. His language has evolved a ton ever since he started watching more TV (as a result of my needing to work from home), especially since he hears slang in Portuguese from the Disney movies, he just says it all the time!

How have you been able to expose your children to the cultures where the different languages are spoken?
We Skype quite a bit with both of our families. Lucas and Edson went to Brazil in July so he was able to fully immerse himself in their culture. My parents frequently fly out here as well, so they get their Spanish culture in as well. We also go to library readings for kids in Spanish.

What resources and activities have been most useful to you? What, on the other hand, has not been useful?
Our library has a few Spanish books which are helpful. I wish they would have more and in other languages. I would love to be able to have more books in Portuguese but unfortunately, those are hard to come by and buying them online is sometimes really expensive. The library readings are great because he gets to see other kids that speak his language as well.

What challenges have you faced as you raise your children with more than one language?
It hasn't been a problem yet but I'm scared of what will happen in the future once the kids are going to school and learning English. It will become their social language and I'm scared that they won't want to speak at home anymore and then turn into one of those kids that understand the parents' language but don't speak it. We plan on having more family vacations to both Chile and Brazil in the future but until that point in our lives, I'm scared of them rebelling against the languages. Or even telling us that since both Mom and Dad speak English, why can't we all just speak English?

Do you have any advice for us?
Just keep at it! It's very important to be consistent with the target language and if you don't know a word, look it up! That way you and your child are both learning and you're still using the language. As far as those people we encounter who don't speak either Spanish or Portuguese, we just explain the situation and have a little patience with them. We still speak to the kids in Spanish or Portuguese when we have to say something and then translate it for the other people around if they seem uncomfortable. Most of the time, I've found, people are fine with us speaking our languages to them.

What do you think parents, caretakers, teachers, and/or researchers need to know about teaching a second language to children? What do you wish you had known when you started? What, if anything, would you do differently now?
It's very rewarding! To know that your kids' minds are like sponges and can pick multiple languages up in just a snap is great! One thing to keep in mind is that because they're learning more than one language, it doesn't mean they're slow. We've had people treat Lucas like he was a child with developmental difficulties because of it. That really bothered me because he's extremely smart--he just doesn't speak your language yet. I wish I would've known to pick up more books/movies for the kids to watch. Also, I would've researched more to find mommy groups that were in the same situation so that the kids could get together and learn together as well.

Answer your own question now--what did I not ask about that you would like to comment on?
It's more of a question--I guess I'm struggling with when to introduce English (formally) to Lucas. Should I let a preschool do it? Or should it be me? If it is me, then will he not want to speak to me in Spanish anymore?
Posted by Sarah @ Baby Bilingual at 6:40 AM