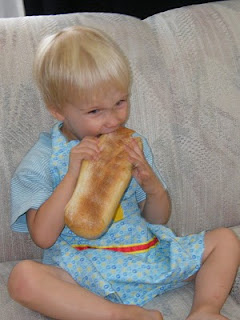 I've been slowly working on completing all the pages in Griffin's baby book and regretting the fact that I occasionally let several months at a time slide by without jotting down notes about his growth and development. For example, I'm on a page that asks about some of his "firsts"--his first bath, first smile, first time he walked unassisted. Those are fine--I did write down those dates. But I don't know his first laugh, his first time walking up stairs, and lots of others.

And a few of you are wondering why I wrote down the dates of the weird stuff but not the normal baby developmental milestones. Yeah, me too. My notes also are sprinkled with random Griffin-produced phrases like "choo-choo Boppy" and "pumpkin pénis," yes, pronounced à la française.

(Now let's see how many hits this blog receives for Google searches about pumpkin penises! Roll your eyes all you like--I bet we'll have a couple.) 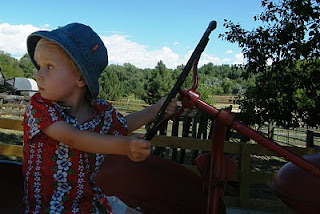 Anyway, last week Griffin participated in his first language study. The Cognitive Development Center at the University of Colorado is investigating how bilingual children learn new words, positing that kids like Griffin pay more attention to pragmatics than do monolingual children. He had a lot of fun playing the researcher, a student who presented him with various oddly-shaped forms covered with interesting textures and colors, then taught him the names for the new objects, then had him pick similar objects out of a tray of other oddly-shaped objects.

Griffin has always been passionate about transfering objects from one container to another, thus these tasks really resonated with him, so he had a blast. (Also there was a train and tracks to play with, and she gave him a book. That makes for a very good morning for my little boy.)

As for me, I enjoyed observing how very open-minded he was about the whole process. The researcher told him this thing was a "zuli," and he accepted it right away, asked me if I wanted to hold the zuli, and then told her that the round red thing covered in the same sprinkly texture was a "balle de zuli" (a "zuli ball").

In the car on the way home he told me that he liked the zulis! 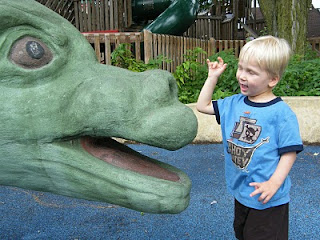 I also learned a lot by completing the parent questionnaires ahead of time. One task involved looking at lists of words and indicating whether he speaks (not just recognizes or understands) a word or phrase in English, in French, or in both. As I went through the lists, I realized that even though most of his phrases and sentences are in English--even when speaking with me--he probably knows more words in French. Every list of nouns ended up with more words in the "only French" column than the "only English" one. The verbs seemed about even, and he seems to know more function words like pronouns, conjunctions, and adverbs in English than in French.

I think that since he does more reading with me than anyone else--simply because I spend more time with him than his daddy or his daycare providers--he has encountered more words in French in context that are not part of his everyday life. So he knows the names of exotic animals, things you see at the beach, and so forth, in French, but not English, because they don't come up in daily conversation, at daycare, or in the books that his other relatives read to him.

I would also add that his comprehension in English and French is about equal.

But when it comes to actual meaningful communication, getting his needs and wants and interests understood, he relies on English, because that's what he hears most often and because he has all the little pieces to put into the sentences, even if they're not always grammatically perfect. ("That's Daddy's black car! Need me go in her car!")

Now I just have to figure out what to do when he asks to play with the "balle de zuli" here at home! 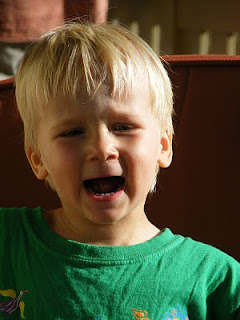