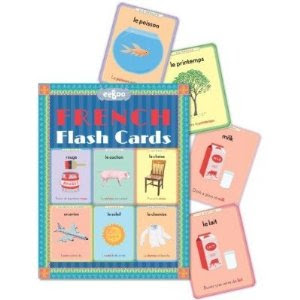 Well, of "above averageness," at least. (Mostly I was just looking for a catchy title for this post.)

I have long been skeptical of flashcards as a way to learn languages. The thought of a parent forcing a child to sit still while showing him one unrelated card after another, making him repeat the word aloud, telling him to stop fidgeting and memorize--well, that just makes me cringe. (I once played the role of a precocious but screwed-up teenager whose mom-with-unreasonable-expectations subjected her to Greek and Latin flashcards as a baby in a very good play called Eleemosynary by Lee Blessing. This is perhaps what turned me off kids and cards.)
Now, mind you, I have no problem with using flashcards as a study technique, which I've done with every foreign language I've ever studied. But there are so many other (better) ways to introduce words and concepts!
Yet when I saw this cute box of bilingual (French-English) flashcards when I was pregnant with Griffin, I bought it anyway. (I'm such a sucker for kids' French stuff. I'd probably buy a new set of knives if they had drawings from Le petit prince embossed on the handles.) The company that makes them is eeBoo. Other companies that make French flashcards are here. (I have a few other sets, too, but this is the one that Griffin is drawn to.) 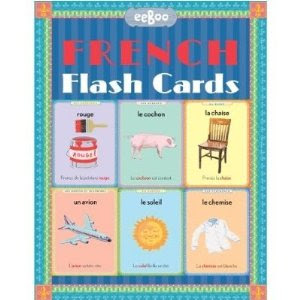 Flash forward 2.5 years, and we discover a toddler with a propensity for dumping things out and transferring things from one container to another. Translation: a toddler who loves flashcards!

As long as this post began in a negative light, let me get my critique of this set of cards out of the way: the sample sentences illustrating the target vocabulary are often either dorky, very dorky, or decontextualized. 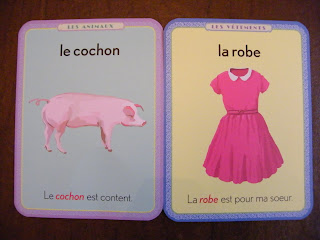 For example, "The pig is happy." Really? How do you know? I can't tell. Will this sentence help a learner figure out what "cochon" or "content" means without reading the translation on the back? Nope.

A few other pickier complaints: the wrong gender is provided for the word "shirt," which is even featured on the cover of the box; four of the eight "nature" cards show the same tree in different stages (ie, no leaves for winter, buds for spring, green leaves for summer, and other colors of leaves for autumn), which Griffin simply doesn't understand (having, say, snow accompany the winter card would help, but I would have prefered just using different pictures to represents other elements of nature, like a lake, a forest, a stream, an acord, roots of a plant, a garden, rocks, a flower....).

And this is probably a good place for me to mention that you don't even need to buy bilingual flashcards for your babies, toddlers, and preschoolers: if they can't read, it doesn't matter what language the words are written in! (On the other hand, if your husband is trying to learn French along with your kid, he might appreciate seeing the sentences written out.) Or you could just put Post-it notes with your translations on the English flashcards.

And for that matter, you don't need to buy flashcards at all. They're handy, yes, but also limiting. Make your own! (I haven't created any for Griffin--but I could, right? Especially if I'm not happy with this company's nature cards.)

Anyway, here are a few non-flashy things that Griffin and I do with these cards (in addition to the simple displacement of them from their box to his play kitchen to the slats on his crib to behind the changing table). We play flashcards a lot, but it hardly ever involves my holding up the card and asking what's on it.

We put them into categories--all the animal cards together, all the food, all the objects found in nature, etc. What's really cool is that my toddler is not constrained by the categories we grown-ups would create. 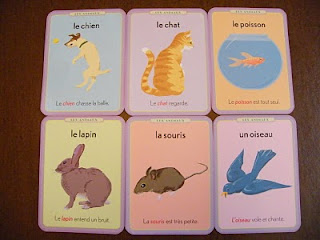 For example, he put la lune in the pile of pictures of things in the house. When I asked him why, he pointed out that the moon is in his room. And right he is--his nightlight is a 3D replica of the moon which lights up in different phases. (Yes, we're geeks, and proud of it. It's inevitable when a teacher-librarian marries a rocket scientist.) 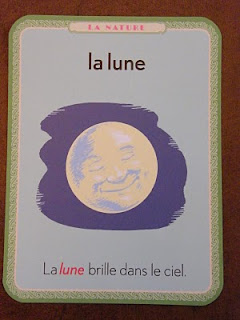 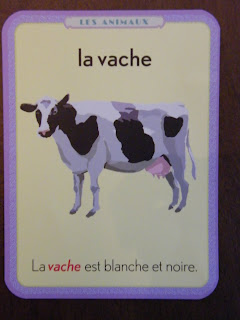 He says it's because he has a stuffed cow that he sleeps with. That works for me!

We also practice identifying colors using these flashcards. But rather than holding up the, say, bleu card and asking him what color it is, I hold up the color card with an object and ask if the combination makes sense. 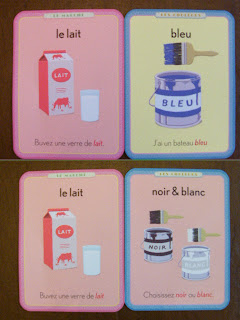 Trust me, this is endless amusing when you're two years old.

And finally, a few other ideas to try:

--Set out examples of objects pictured in the cards. (We do stuffed animals, his toy food, and other toys.) He has to put the card beside the real object like a label.

--Place three cards in front of him. Ask which one is in the middle. Then move it to the left, to the right, up, down, behind, and so forth to practice the prepositions.

--Give him five cards and ask him to put them in order from his favorite one to his least favorite. (Griffin can't do this yet--he either likes something or he doesn't. And that can change from day to day. Just ask the carrots.)

--Count the cards. (Griffin can only kind of do this--and he's better at counting in English, because he always skips "quatre" and gets very confused in the teens.)

--Have I mentioned throwing the cards around and hiding them behind furniture? (That's more of a linguistic challenge for me than for him--I have to work hard to express my displeasure without teaching him words he doesn't need to know yet.)

What other language-rich activities could we try with cards like this? Please share your flashes of brilliance in the comments!