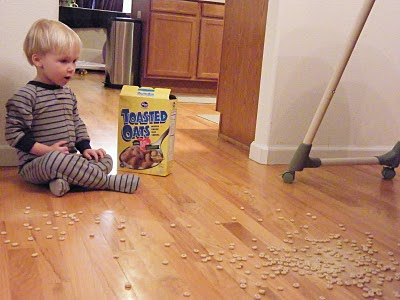 At 25 months old, Griffin continues to say things that make us go "Wow!" or "Awwww" or "Oh!" or "Huh?" Here are a few recent notables:

Griffin had been fighting a persistent ear infection for a month when one night he grabbed his head and said "My ear hurt!" We were so glad to hear that--it was the first time he had ever articulated what exactly was causing him pain. "Ne t'inquiète pas, chéri," I told him. "J'ai tes médicaments ici. Ouvre la bouche!" I brandished the syringe of antibiotics and the second one of Tylenol and tried to get him to open his mouth. He looked at me, confused, angry, hurt, and shook his head, and clapped his hand on his ear again. "No bouche, oreille!" Poor kid--here he was, in pain and telling me about it, and I wanted to put the medicine for his ear in his mouth! No wonder he looked so misunderstood and betrayed.

As we wean him, I've been trying to replace the bedtime nursing with a different kind of special Maman-Griffin time, creating a routine of reading and singing to him. One night, while sitting in a comfy chair with just a lamp on above us, I looked him tenderly in the eyes and said, "Griffin, je t'aime de la tête aux pieds" (I love you from your head to your toes). Without missing a beat, he responded, "Je t'aime la tête à la lumière" (I love you your head to the light)! Now he says it to me every night (and sometimes even during the day).

One day, I was reading him a book that ended with the mommy walking out of the room after tucking the baby into bed. Griffin must have thought that I missed one important detail as I closed the book; he added "Bébé fait dodo. Maman fait pipi." (Baby's going to sleep. Mommy's going to the bathroom.)

At playgroup, Griffin and some of his friends were "cooking" at the toy kitchen. They would bring pots and bowls of plastic food around to us moms, and we'd oooh and ahhh over how yummy everything was. One mom asked him what kind of soup it was. Griffin paused a moment and then replied, "Hot!"

We went to the zoo this past weekend, which thrills him. I was asking him, in French, which animals he wanted to see there. He named things like elephants, lions, and giraffes--all pronounced more or less correctly in French!--and then concluded his list with "dinosaures." At least he said that one with a French accent too! (Oh, and his pronunciation of "hippopotame," hippopotamus, is adorable--he calls it a "hippo-madame.")

And finally, I taught him the word for "download," "télécharge," because sometimes when watching YouTube, the video would stop and splutter and we'd have to wait for it to finish downloading. I realized that he clearly understood the concept (if not the technical reasons behind it) when were listening to a cassette tape in the car. We came to the end of the tape, and it automatically turned over to the other side, but only after about a minute of dead air. Griffin didn't get mad, though; he just said, "Ça télécharge" and waited patiently!
Posted by Sarah @ Baby Bilingual at 11:25 AM