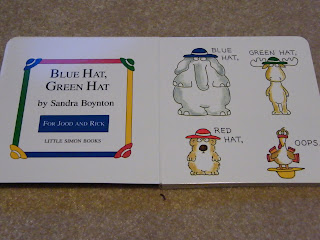 This delightful little tome, Blue Hat, Green Hat, by the ever-popular, always-silly Sandra Boynton was the first book that Griffin asked for by name early this year as he was learning to talk. As you can see from the illustrations, it tells the story of a turkey who just can't quite figure out how to get dressed. The other animals wear their clothes on the appropriate body parts, but not the turkey. Each time he shows up with, say, a shoe on his head or fully clothed to dive into a swimming pool, we see the word "oops" above him. 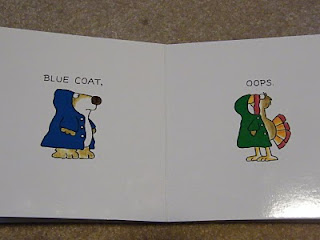 Since I didn't know how to say "oops" in French, when I read this book to Griffin and Carl, I would substitute "uh-oh," a word that Griffin loved to announce (occasionally even before he threw the toy out of the crib or the food off the high chair tray, thereby serving as a useful warning).

(Note: I have since learned that the French word for "oops" is, well, "oups.")

Anyway, Griffin quickly learned to chime in on the "uh-oh"s when I read this to him, and he soon began pointing to it and saying "uh-oh" to indicate that he wanted to hear it again. What a thrill to see my one-year-old requesting a book by name, even before he could say much more than "no" and "more" and "bear" and "lolo"!

Blue Hat, Green Hat, is also the first book that Carl "read" out loud in French, since he knew the names for colors and articles of clothing, and he'd crack up every time he came to the "uh-oh"!

PS: I really, really wish I could find the French equivalent of Sandra Boynton--board books for toddlers that rhyme and tell stories using goofy pictures. (We do have a lot of kids' books in French for Griffin, but most of them are nonfiction and serious, not fun and funny.) Any recommendations? 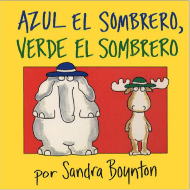 PPS: I even emailed Ms. Boynton to ask if we can ever expect any professionally-translated versions of her books in French! As Adriana points out in the comments below, several have been translated into Spanish, including Doggies, Moo Baa La La La, and our beloved Blue Hat, Green Hat. Here is the response from Pam Boynton:

"Sandra Boynton's books have been translated into Spanish, but not into French. I believe this is a decision that is made by her publishers. I will let her know of your interest in French translations and we thank you for writing!"

Maybe if all my francophile readers write in and request French translations, Ms. Boynton's publishers will reconsider! If you wish, please contact her at info@pfboynton.com and leave a comment below letting us know. On behalf of Griffin, Carl, and French-speaking children around the world, merci beaucoup!
Posted by Sarah @ Baby Bilingual at 8:57 AM