Who cares what language I use? I am Toddler and must be obeyed! 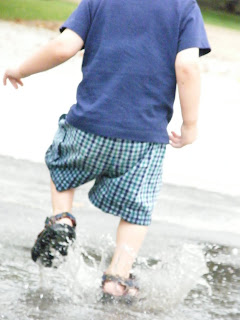 Griffin started talking in January 2009 with the words you would expect--Dada, Mama, uh-oh, arf. He had four general categories of words: people's names, sounds, nouns in French, and nouns in English. (Verbs and adjectives arrived much later, and we're still waiting for pronouns, prepositions, articles, and adverbs.) He would learn one word in either French or English and use it with everyone, regardless of what language they spoke with him. (This was fine and dandy for words like ball, soup, and panda, which sound more or less the same in both.)

With rare exceptions, everyone around Griffin speaks English to him except me, so it's no surprise that he says more words in English than in French. On the other hand, I spend more time one-on-one with him than anyone else, so it makes sense that many of his early words in French described elements of a baby's daily routine: couche (diaper), lolo (breast milk), dodo (sleep), pain (bread), biscuit (cookie/cracker). 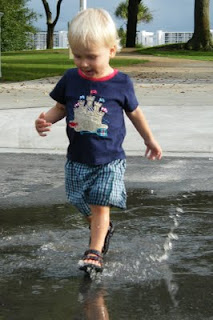 Because I tended to use words like these constantly and contextually, it was easy for my husband and his parents to understand Griffin when he asked for something basic. (In fact, Ed uses the words himself now, eg "Griffin, you can have lolo after I change your couche.")

It's only the past two weeks that Griffin has shown us that he can refer to the same object with different words in the two languages. When he wants Ed to hold his hand, he says "hand" to him, but he'll turn to me and say "main." When he needs to be changed, he takes a clean diaper to his daddy and says "diaper," but he uses the word "couche" with me. His grasp on numbers and how they work is still quite tenuous, but he seems to use French-like sounds with me ("dooo," "cat," deeeese," "douche") and Englishy ones with others ("foh," "sih," "ay," "den"). When Ed and I both took him to the pumpkin patch, he learned to say both "pumpkin" and "citrouille" (the latter is quite difficult to pronounce--see-twroo-ee-yah--so he tends to use "pumpkin" more frequently even around me). In his newest pair, "all done" has joined "fini."
In most areas, though, he sticks with what he knows best, even if it seems arbitrary to the rest of us: "please" but "merci," "awwwww" (which means elephant and airplane--you have to watch for the hand sign to know which one he wants), "pomme" (apple) but "bean-bean" (usually refers to peas, though can also be green beans or black beans), "marche" (walk) but "jump." 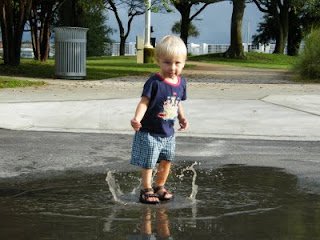 This is SO much fun to observe and try to figure out!
Posted by Sarah @ Baby Bilingual at 9:59 AM