Six and a half years of speaking exclusively French with Griffin really is working, and I can prove it: a week after our 12-day, three-generation family trip to France for the first time (August 2014), Griffin went back to school.  His Spanish immersion school.  His third year there.  And in half an hour at the back-to-school-meet-the-teachers event, I counted five different instances in which he answered a teacher's questions in Spanish with words in French!  He was "oui"ing all over the place!


Since I had never observed him doing that before, I feel safe attributing it to our having spent nearly two weeks in a French immersion environment.  Hourrah!

If I had written this blog post sooner after our return from Alsace and Paris, it would have begun quite differently.  I would have bemoaned the fact that Griffin's fluency in French didn't improve in great leaps.  I would have expressed my disappointment that our trip didn't have the same effect as my fellow bilingual parent bloggers' experiences--it seems as if when they take their families to a country where the minority language is spoken, or when relatives who speak that language stay with them for a week or more, it is a revelation.  These parents (and also the mamans in French playgroup) are rapturous about how comfortable their kids get in the minority language in such a short time.

And, well, it wasn't really like that for us.  Nothing major went wrong, and Griffin did have lots of chances to interact with native speakers--but I can only think of three extended conversations he had with them, and he kept speaking in English to me otherwise, as usual.  No revelations, no magical transformations, no sudden desire to use only French with me.

I had so hoped that our travels would recharge his French brain batteries!  But 12 days isn't enough, clearly, at least when he's still spending each day with our anglophone family in the rental car and lodgings.

But instead of dwelling on my belief that he didn't speak enough French on our trip, let me focus on what he did do!  Here are his linguistic highlights:

We participated in a tour of the Chateau Haut-Konigsbourg specifically for children, in which a man dressed as a medieval minstrel led us through the castle looking for his musical instruments which went missing after the previous evening's feast for the king.  Over an hour of listening to a stranger speak French in a strange place with cannons and towers and a fascinatingly deep well--that's a record!  (And it made an impression on Gwyneth, too; she keeps telling people about how we couldn't find the instruments in the castle.)

During our week in Alsace, we never encountered another American tourist, and the owners of our rental house spoke only French.  And as they lived right next door, we chatted with them regularly.  They even invited us over for drinks one night!  Plus, they were curious about us, and also wanted to make sure that we liked their house, so the landlady peppered me with questions every time she saw us.


(The only awkward moments came when she stuck her head through the open window as I walked out of the shower, and then when we had to admit that we didn't know how to operate the washing machine.  Oh, and when Griffin threw a basketball so hard it cracked a plastic lawn chair.  Oops.)

His other two noteworthy conversations came about because of public transportation.  On the bus, I started chatting with a grandmother accompanying her two young grandsons and called him over to join in.  One of the boys, a six-year-old just like him, told us that "Griffin" (which they pronounced "griffeen)" sounded like a girl's name.  But Griff defended himself and said that was okay, that it's a boy's name in English.  (Interestingly, he also ended up meeting a French boy named Sasha on a playground, and his reaction was shock that the boy had what he considered a girl's name!)  We ended up exchanging addresses and promising to send the French boys a postcard from Colorado.  (Wouldn't it be cool if they turn out to be penpals?!)

The people we spoke with in France seemed surprised and impressed that we're raising our children bilingually and asked us lots of questions about it, but none more so than two young workers at Charles de Gaulle airport who overheard me speaking to the kids in French with my American accent.  Ultimately we spent about ten minutes watching them barrage Griffin with questions, which he handled beautifully.  He even told them about how he's learning Spanish at school!

Then there were lots of little interactions that turned out to me more important than I realized at the time--opportunities for Griffin to read and speak French because he wanted or needed something.  For example, my husband took him out on a Sunday to look for a bakery that was open; they got completely lost and encountered bakeries that were closed for the day (or for the season).  Since Ed doesn't speak French, he was entirely dependent on our six-year-old to translate the signs and ask strangers for directions! 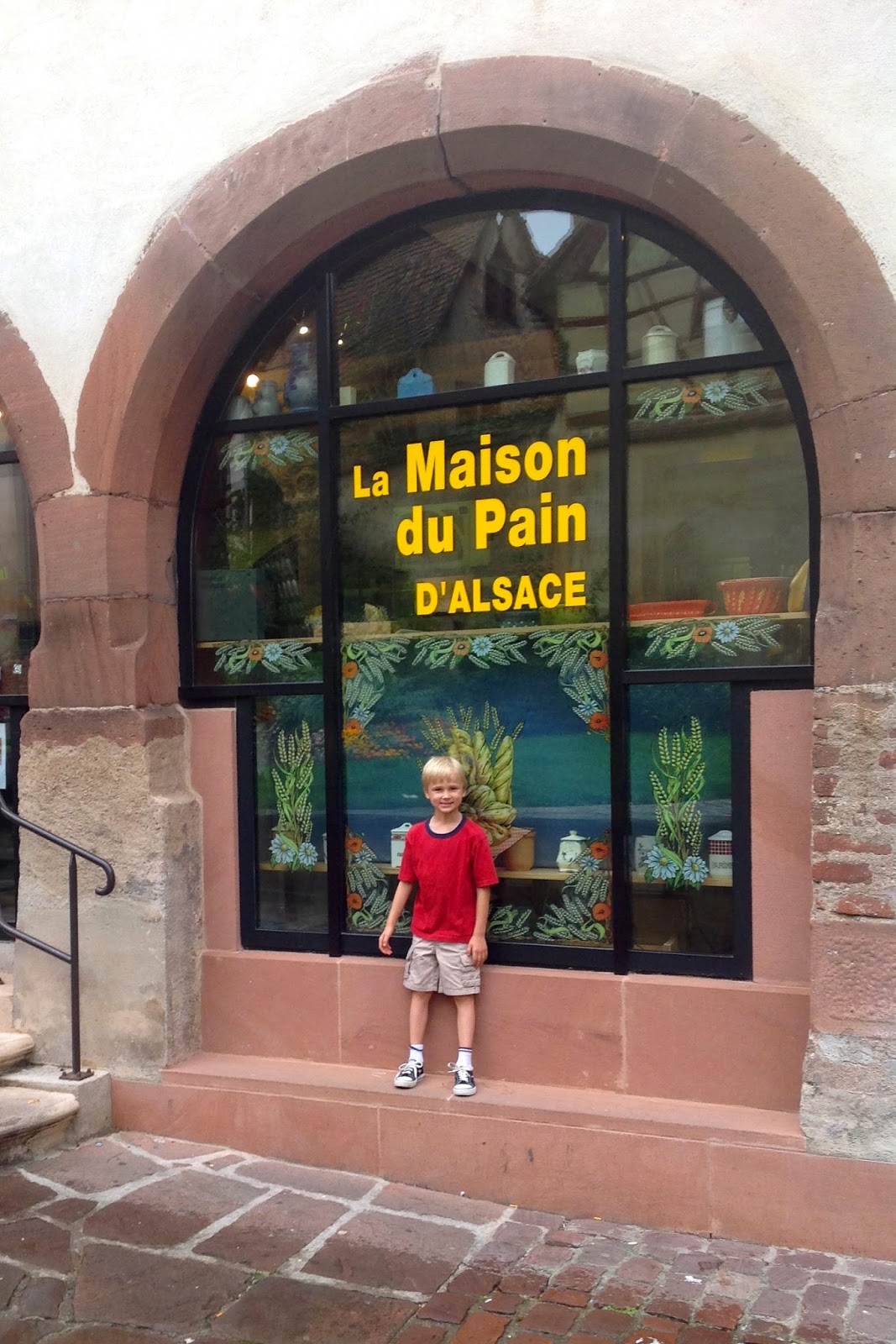 My children have an unfortunate habit of leaving their hats behind, and true to form, they lost one apiece on the trip.  Ed and Griffin retraced our steps in Colmar, looking for Gwyneth's errant chapeau, which meant that Griff had to do things like ask the carousel operator if he had seen it.  And when Griff's cap went missing at a museum in Paris--and he was really mad about that--he took two separate trips to the lost-and-found desk to try to track it down.

When Griffin wanted a map of the charming village of Riquewihr, I accompanied him to the tourist office and watched proudly as he obtained two of them--one in French for us and one in English for Daddy.  He also read menus and ordered his own food in restaurants, paid attention to signs all around him (traffic signs, lists of bus stops, directional indicators in the metro), and refused to leave a bookstore until he had paged through an entire Tintin comic book.

(And it was so reassuring to have strangers compliment my own French as well as the fact that the kids are bilingual.  Maybe they were just being polite, but I'll take it.)

I'd like to think that we aided in the efforts of international diplomacy, that the folks we met have better opinions of Americans than they used to!  And while it probably won't take long for Spanish to regain its position as Griffin's second most familiar language, I now know that French is in there firmly enough that it will come back out after another immersion experience.

Now I just have to break the news to my husband that we'll have to go to another Francophone country next summer....
Posted by Sarah @ Baby Bilingual at 6:10 PM