I'm delighted to introduce you to Claire, a mom from France married to a bilingual Englishman, whose experience raising their sons bilingually led her to create Justine et Sebastien, an educational website with her stories about two bilingual children. 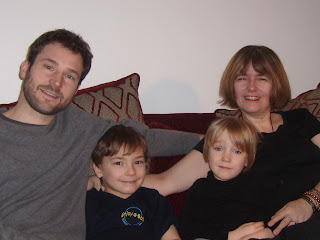 Tell us about your family!
Bonjour, my name is Claire, I was born in France from French parents and raised in Paris. I am a teacher of French language for adults and currently an author in bilingual literature for children.  Phil, my husband, has double nationality: English (by his father) and French (by his mother). He was born and raised in England and although English was the main home language when he grew up, I regard him as bilingual.

We met in Paris and spoke French from day one. We moved to Edinburgh in Scotland and carried on speaking French at home. Phil is an architect.  We have two sons: Ben, age 7½, and Thom, age 5½. They were both born in Edinburgh.  We moved to New York, United States when the boys were 3½ and 1½.We spent almost three years in Brooklyn, NY before moving back to Edinburgh in summer 2011.

Who speaks what to your children?
At home I obviously speak French to my sons, and we speak French together with my husband.He speaks English to our children. He can switch easily from one language to another. French is “theoretically” our home language. Sometimes, and I wish I could avoid that, I will speak English and translate into French (or the other way round) to my sons in front of their friends just to make sure everyone is comfortable and not left out of the conversation.

I think it’s a chance and a plus for children to be exposed to a second language. It opens their eyes to a different culture and way of living. I’m willing to think it gives them more opportunities for their future. It can also help them in their social life and give them more confidence.

What approach(es), method(s), or pattern(s), if any, are you using to raise your sons bilingually?
I would say it’s based on common sense; I don’t want to do school at home with my children. I’m exposing them to French culture through books, magazines, and films. When they were younger (from infancy until school age) my husband and I would alternate at story time. One day I would read a story in French, the next day it would be my husband’s turn to read a story in English. We stopped doing that when Ben started kindergarten in New York. At this time, he was learning to read in English by himself, and I wanted to avoid any confusion.

How well do your sons understand, speak, read, and write their two languages?
Both my sons understand the French language perfectly.  My elder son, Ben, replies to me in French very frequently now and can initiate a conversation in French. He goes back to English if there is a word he can’t find. I would say, he speaks to me 50% French, 50% English! (In France, it was 70% French, 30% English, approximately!!) His reading in French is now correct. It’s interesting how there has been a parallel between the experience of learning to read in English and in French, with him not having been in a French classroom. The writing in French is more a phonetic process, though. One of my goals is to focus on reading more French books now that he has become an  efficient reader in English.

Thom, my younger son, remains very shy in French. He understands everything; but replies to me in English most of the time. He has started to answer questions in French, though. He seems to follow a progression similar to his brother who was more or less at the same stage at an identical age. They both won’t speak French to me in front of their friends, as they don’t want to appear as different.

How have you been able to familiarize your children with French culture?
I’ve been using mainly magazines and books to expose them to French culture. When they express an interest on a specific topic, I try to emphasize its connection to France or share my French point of view. For instance, we had recently a discussion with Ben, who is at the moment interested in Formula1, about the history of French pilots, which led to a more general conversation about the French automotive industry).

What challenges have you faced?
The most challenging task for me on a daily basis is to constantly speak a language different from the one spoken around us.  It’s so easy to give in and speak the dominant language, but I think you have to stick to your mother tongue language all the time if you can when talking to your children.

Another challenge is also to make sure your children will understand the point of speaking another language, the fact that it’s something for their own interest, rather than something to please Mummy or Daddy. My younger son had a strong “Daddy phase” at one point and would ignore all my suggestions to say anything in French. He would worship my husband and therefore talking like Daddy was part of the process. All my efforts were useless during this phase and although I was still speaking French to him at the time, I knew I couldn’t expect him to respond in kind.

Of course, I’ve been using “tricks” to make them speak in French without forcing them. For example, asking questions which offer choices has been working very well with my sons: Est-ce que tu veux le crayon rouge ou le crayon vert”? (“Do you want the red pencil or the blue pencil”) They will repeat the French words I used and give me an answer in French: “le crayon rouge.”

Children should think of learning a second language like playing a game. Parents and teachers should emphasize the fun aspect of acquiring skills in another language, and should teach the language using songs, drama, etc….It shouldn’t be seen as an additional school subject but more as an afterschool hobby in the early years.

What do you think parents, caretakers, teachers, and/or researchers need to know about teaching a second language to children?  What do you wish you had known when you started? What, if anything, would you do differently now?
When my children began to speak, with me speaking French to them and my husband English, I took it for granted that they would develop their skills in both languages at the same pace and therefore speak both languages at the same level from the beginning, but it didn’t work out this way. It’s not something they did naturally and we had to work together on it.

If I could give a piece of advice, it would be not to hesitate to ask a professional who is not a member of the family to help you. Ben went to a French afterschool program in New York run by a brilliant teacher; this triggered something that allowed him to become more confident with the French language.

What I would do differently now would be to focus and stick to French 100% whatever the context we’re in and obviously to spend more time in France. As a friend of mine always said: ”Immersion in the country is the best thing to speak the language of this country.”

Answer your own question now--what did I not ask about that you would like to comment on?
The last question I would ask myself would be "What has all this fantastic experience brought me personally?"

Lots of rewards. The observation of this whole process inspired me in the creation of my literary project, “Justine et Sebastien.”
Posted by Sarah @ Baby Bilingual at 11:26 PM