Meet Michael Fee and his wife Karen, both Americans, who are learning Spanish and French along with their children! Thank you very much for letting me profile your family. 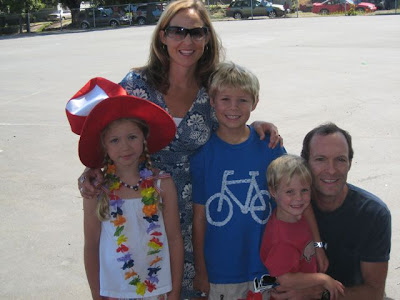 Introduce us to your family--
• Parents' names, occupations, nationality
o Michael Fee -- Managing Director of Lango, a company which offers French, Spanish, and Mandarin classes for kids ages 18 months to eight years old in 17 states across the US. (For more information about local classes or if you are interested in becoming a licensee and bringing classes to your own neighborhood, visit http://www.langokids.com/.)
o Karen – Associate Development Director for Lighthouse Community Charter School

What languages are spoken by the adults in your household and at what level of proficiency?
• We’re both learning! I started Lango because I had a classically American language-learning experience: started late (high school), wasn’t immersed, and never lived overseas. We want better for our kids! So we’re all learning Spanish, and my daughter and I are also learning French.

What languages are you exposing your children to, and how?
• Spanish and French. They’ve gravitated towards these, and most of all, we want them to love learning languages. At times I wish they were learning Mandarin, because I do believe it will become very relevant in the coming years, but I don’t want to push them to the point of discomfort.

Why do you want your children to know more than one language?
• So many reasons! Intellectual, cultural, practical…but most of all, we believe that borders between cultures are eroding, and to get along in this shrinking, “flattening” world, whether in business, politics or travel, we all need to take the step of reaching out and communicating in other languages, not just assuming everyone will speak ours.

How well do your children understand, speak, read, and write the different languages? How do they feel about them?
• We’re getting there. My daughter has shown the greatest proclivity; she retains vocabulary well, and her accents are spot-on. We’re all becoming more comfortable with speaking only in our new languages at dinner and other uncontrived situations.

How have you been able to expose your children to the cultures where the different languages are spoken?
• Living in California we’re exposed to Spanish all the time. My older son plays on an all-Spanish-speaking soccer team, and my younger son has a preschool teacher who’s from Mexico and speaks Spanish with him (even though it’s not an immersion school). We go to the market in Oakland’s Fruitvale District and hear nothing but Spanish when we buy our vegetables!

What resources and activities have been most useful to you? What, on the other hand, has not been useful?
• Lango classes, of course: learning new languages from native speakers alongside peers and engaged in dynamic, thematically-based activities.
• “Real-world” activities – incorporating new languages into our everyday life, such as dinner or chores around the house.
• Playing traditionally English games, but speaking Spanish. The kids are comfortable with the games so don’t mind experimenting with the language.
• There’s some good software out there, but we haven’t found that it holds their attention for long. Also, most of it is translation-based, which really confuses our youngest child.
What challenges have you faced as you raise your children with more than one language?
• Mostly it’s not speaking it fluently ourselves! When we’re trying to get through daily life – chores, pickups and drop-offs, meals – it’s a lot easier to speak the language we are all familiar with.

Do you have any advice for us--for example, how do you encourage your children to use the other languages, or how do you cope with family members who don't speak the child's second language?
• Be patient. Don’t force it. Becoming fluent takes years, and any form of early exposure is going to move your child towards bilingualism.
• Try to expose them in a variety of formats – in a class, with family and with friends, through music and media, in everyday life. They shouldn’t see their new language as something that only happens in certain contexts.

What do you think parents, caretakers, teachers, and/or researchers need to know about teaching a second language to children? What do you wish you had known when you started? What, if anything, would you do differently now?
• Start early, and stick with it! There will be times your kids will push back, as with anything new or anything that takes a long time to learn. Without forcing it, just keep at it and it will take hold.

Answer your own question now--what did I not ask about that you would like to comment on?
• I love seeing all the new ways to learn languages come onto the market – but nothing replaces communication with real human beings, especially native speakers. Watching their mouths move, seeing their expressions, gauging their responses and not just pre-formulated statements – learning a language needs to be real.

Here, here! Thanks for sharing your experiences with us. It sounds like your whole family is invested in learning languages together--how wonderful!
Posted by Sarah @ Baby Bilingual at 10:12 PM