turns out that two years old isn't too young for the Smithsonian! 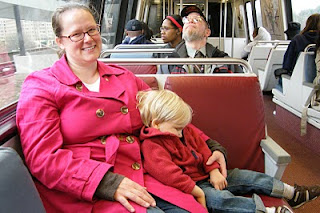 Griffin and I recently spent six days in the Washington, DC, area, where he got to do all sorts of exciting things like see dinosaur skeletons, have a great-aunt give him presents, ride trains, read books with his uncle, and hang out with a greyhound. I now know that it is exhausting to travel by myself with a toddler (especially when a snowstorm causes flight cancellations and you arrive at 9:30 pm without a suitcase!) and that I really, really don't care for dog hair on my underwear and that a house shared by five bachelors equals a bathtub that makes said toddler exclaim "yucky!" 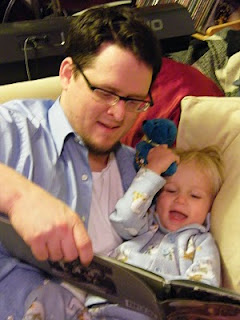 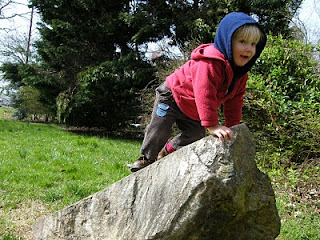 Or give him things to climb on; he loves that too. Here he is atop a very interesting rock in Falls Church, VA. 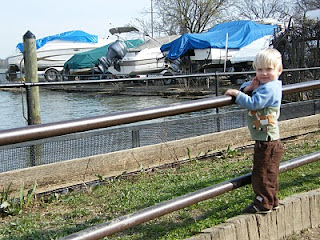 Or take him to the Potomac River in Alexandria, let him watch the boats bobbing up and down, give him bread to feed the ducks, and then refuse to let him go swimming despite his howls!

On the other hand, I also now realize that you're never too young for the Smithsonian museums, and since they don't charge admission, you don't feel like you have to drag a kid around with you for hours to get your money's worth. I took Griffin to three museums, and he found things to stare at in wonder in all three of them. 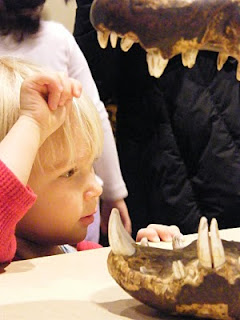 His favorite was probably the Museum of Natural History--he shrieked and exclaimed "dinosaure squelette!" (skeleton) when we entered the prehistory exhibit--but he also really enjoyed the Museum of African Art, which was full of colors and textures and sculptures and paintings. They even had one room where kids were encouraged to touch the art! 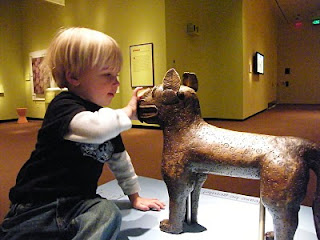 (And where their moms are allowed to wear it!) 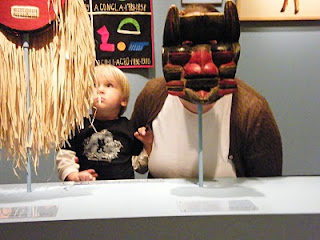 The whole trip was also a good vocabulary boost for both of us. Griffin learned lots of new words in French and I was able to spend hours at a time talking about something other than food, diapers, or discipline! And especially in the African Art Museum, he could see that the world is a lot bigger than our little city in Colorado.

So, in conclusion, take your little kids to Washington. Just don't stay at my brother's house.