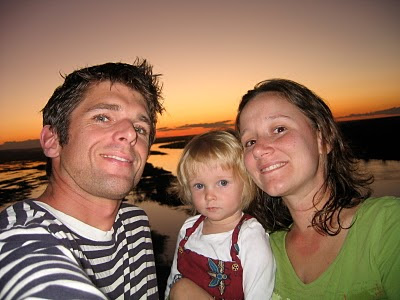 Meet Clarisse Cunha Linke, author of the blog Bicicleta-Bicycle-Ombasikela, who is raising her toddler Julia with four languages in Namibia! (That's them along the Zambezi River in the above photo.) Thank you very much for answering my questions and letting me profile your family on my blog.
What languages are you exposing your child to, and how?
Portuguese (mother's mother tongue), English (father's mother tongue, official language of Namibia, the preschool's language), Oshwambo (the nanny's language, one of the tribal languages of Namibia, lots of people around us speak it), and Afrikaans (slowly starting to show up in the picture, used to be the country's official language during apartheid and is still the most common language around. Some children at the preschool speak it, and so do teachers etc., but not officially).
Why?
First and foremost it would be awkward if she couldn't speak our own languages...so basically we never thought of not raising her with Portuguese and English. We did think a lot about Oshwambo--was it worth it, etc. We decided that it would be great for her to be exposed to a language which is neither Anglo-Saxon nor Latin-based and which is mostly oral, even though we don't know how long we will stay here. But that doesn't matter. She doesn't need to be fluent in Oshwambo; we just want her to really be able to recognise that there are different ways of thinking/structuring and expressing toughts...and honestly, provided that she enjoys the process...it is so cool that she might be able to speak and African tribal language!
How well does your child understand and speak the different languages? How does she feel about them?
Julia is 28 months old, and since December she has been able to really put sentences together in both English and Portuguese, follow conversations, and start to swap languages between mum and dad. English is the predominant language, but she does extremely well in Portuguese. She has a good vocabulary, probably because I am very aware of Portuguese being the minority language, therefore I talk a lot with her, read, sing, explain every little thing in complete sentences and avoid baby talk. We know she says a few words in Oshwambo, but as far as we can tell, she mostly understands it.
I think she loves that she is now able to communicate and be understood. At the end of 2009 she was throwing a couple of tantrums a day. Once we traveled to both Australia and Brazil for holidays, her language skills got much better. She went from gibberish to complete sentences, dialogues...and all of a sudden the tantrums were gone. She loves translating to mum and dad as well, which somehow tells us that she might be enjoying the exclusive communication she has with each one.
How have you ben able to expose your child to the cultures where the different languages are spoken?
Portuguese--as I said earlier, lots of talking and DVDs, books, CDs, Skype with grandparents and aunties, listening to music and dancing together.
English--we do the same as above, but that's the school language and also the predominant language at home.
Oshwambo--nanny's language, also the language of the two girls who spend almost every second weekend with us. (They are from villages but we brought them to Windhoek to study. They stay during the week in hostel and spend some weekends and holidays with us.) They all do lots of singing and dancing; Julia has Ovambo dresses; and from time to time we go to the villages.
What challenges have occurred as you raise your child with more than one language?
So far, not many challenges. Her potty training process in October last year had one small lapse because of language, but she quickly got over it. :-)
What resources and activities have been most useful? What, on the other hand, has not been useful?
Every resource is welcome in our house! Even counting steps and flowers as we go helps a lot! She does one through ten in Portuguese as well!
As I said--books, CDs, DVDs, Skype. I can't think of anything not useful.
What do you think parents, caretakers, teachers, and/or researchers need to know about teaching a second language to children? What do you wish you had known when you started? What, if anything, woudl you do differently now?
I wish more people were open to the idea, without being conservative. Children can do so much more that we can imagine!!! It's unbelievable and fascinating. Just exposing them to other cultures is the best gift we can give them. It is not to make them little geniuses, but to make them kind and interested in the world around. So many people think we are causing a confusion in her mind, that we are harming her....I'm just happy with the process. I'm sure that will make her someone interested (and hopefully interesting!).
OPOL (one parent, one language) is important if you are everyday in touch with the child, but again, no need to be obsessed. At the beginning I was super strict. I still only speak Portuguese, but if we have friends around, I allow myself a bit of English with her to be more inclusive, for example.
Posted by Sarah @ Baby Bilingual at 9:47 AM