Despite the American Academy of Pediatrics' and our librarians' recommendations, we occasionally let Griffin watch some television. (Screen time is strongly discouraged before age two.) Fortunately, he is content to watch the same six music videos over and over on his daddy's laptop!

Of the six, one is pretty typical: Taylor Swift's "You Belong with Me"; Griffin calls out "football" and "bye-bye" and "pretty" at the appropriate places and can watch it again and again and again. And again.

The others, however, are not anything you'd see on MTV. (Does MTV even broadcast music videos anymore? We don't have cable, but I've heard that the music programming has shrunk considerably since the days when I would watch it after I put my brother to bed when babysitting and then quickly change the channel to Nickelodeon when my parents came home.)

Anyway, we recently purchased Sesame Street Playground. It contains songs from Sesame Street shows around the world and includes a bonus disc with five music videos. 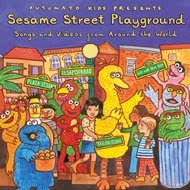 Ever wonder what the theme song to this beloved show sounds like on the Indian subcontinent? Not a thing like the familiar sing-songy "Can you tell me how to get, how to get to Sesame Street" in a major key!

How about a jolly, rotund man named Ronnie cheering up a hyper girly Muppet by singing a song in Hebrew with nonsense words like "En Den Dino"? (It's very catchy--Griffin claps and sings along. In fact, so do his mother and father!)

My husband was pleased to recognize a few words from his college "Russian for Reading Knowledge" classes in the video of five young male Muscovite street sweepers, all wearing overalls with one strap unbuckled, channeling American boy bands from the nineties while they serenade us about the people who work in the city.

Then there's the South African anti-pollution song about picking up litter, where myriad Muppets sing earnestly in English and something else (Afrikaans?). The English is so highly accented to our American ears that if we hadn't read the subtitles we might not have realized that it wasn't a foreign language! The video features one of Griffin's favorite activities (putting stuff in trash cans) and lots and lots of Muppets (all of which he calls either "Elmo" or "Cookie Monster").

My favorite tune from the DVD, however, is yet another educational song: a song from Mexico about the importance of eating fruit. It features another jolly, earnest, round-faced guy surrounded by humongous singing and dancing tropical fruit. I didn't even recognize all of the fruit, even with the English translations provided in the subtitles. Thanks to my Oxford English Dictionary, now I know, for example, that a "pitayo" is a fruit that grows on a cactus!

So while not all of the videos reveal much about the culture of the countries where they are aired, they still give us a glimpse of what music, kids, and Muppets are like around the world, and they expose Griffin to other languages.

Stay tuned for more reviews of language-learning videos and DVDs that we've shown Griffin. Feel free to click on "comments" and share your recommendations for toddler viewing!