A: A very lively tutoring session that might include cinnamon toast, ladybug imitations, a Superman doll, and the labeling of the teacher as a "poopyhead."

For about a month now, I've been meeting twice a week for private tutoring with a mother and her two young daughters to help them all learn French. The five-year-old had French lessons at her Montessori preschool, and the mom liked that idea so much that when she found out that her new school doesn't offer French, she hired me to fill that gap. Now the four-year-old is taking French at Montessori too, so they've both had that background. The mom has been buying them picture books and French instructional CDs, thus they've all been exposed to it a bit at home too.

I was thrilled to get this gig, both so I could supplement my part-time teaching and also so I could put into practice ideas I'm gleaning from my research about bilingualism in children. But boy is it different from teaching a class of college students! While I can complain about the latter's occasional lack of enthusiasm or reluctance to do homework, at least they sit down and stay seated for the whole lesson! The mom and I quickly realized that out of the hour and fifteen minutes that we meet, the girls were only good for the first 20-30 minutes, and that I needed to change activities quickly before their attention span (or they themselves) wandered elsewhere. This is definitely keeping me on my toes and leading me to adjust how I present and practice material! (I spend about 45 minutes per session one-on-one with the mom doing formal grammar instruction after we work with the girls.)

Here's what I'm discovering works well so far with the girls:

Lots of movement: Taking a "tour" of the house to name objects and rooms; bringing animals, dolls, and Spiderman into the lessons ("Touch Spidey's foot!" "Put the elephant between the couch and the table"! "Now your dolly Madeline can choose a card--can you help her?"); following directions in French to prepare simple foods like cinnamon toast; making exaggerated gestures while we recite nursery rhymes.

Giving them lots of input in French but not requiring a them to say a lot yet: Giving choices ( "Is the elephant in front of the TV or beside the TV?" "Do you think 'petit' means 'big' or 'small'?"); asking silly questions ("Do you put the cinnamon in the toaster? Do you put the toaster on the bread?"); asking "Where is the ..." and having them run and point to it; reciting nursery rhymes but only requiring them to chime in with the words that we have invented actions to match (for example, I taught them a rhyme about a ladybug, so we have gestures for things like antennas, wings, and polka dots). In other words, I've learned not to ask open-ended questions and not to expect complete sentences from them in French.

Here's what they haven't shown much interest in so far: singing songs and having me read to them. And sometimes they just don't want me to speak French to them at all. So to combat that, I introduced Hubert this week. Hubert is a hand puppet, a wildly-colored beaky monster with big googly eyes. Hubert only speaks French, so if the girls want to talk to him, they have to use their French words. (He's just freaky enough that I probably won't show him to my nephew Carl just yet--don't want to traumatize the baby!) They also tend to pay more attention to Hubert when he teaches them something than they do when "Madame Sarah" speaks. I also bought little finger puppets in animal shapes for them to use; these puppets, of course, don't speak English either. 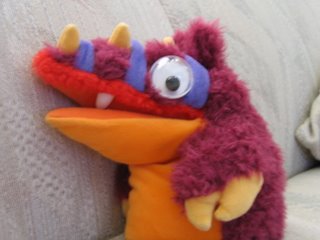 Here's what I'm really struggling with: How much English should I speak with them? Should I pretend not to understand them when they speak English? How should I discipline them or at least acknowledge when they are off task or being disrespectful? How much can I do when they can't read yet, can't refer to a book, can't look at how a word is spelled when I (or Hubert) teach it to them? What should I do about basic vocab like counting and telling time, when they don't know to do that well in English yet? How do we move beyond just naming objects and following simple directions?

And finally, here's what I'm curious about: Do the girls understand that French is another language? Do they want to learn it themselves? (The mom says the five-year-old likes to show off, and I've seen her rattle off names of colors and objects proudly.) What's the best motivator--praise? Exciting games? How much can I teach them in only 20-30 minutes twice a week? How much will they retain? What's the best way to keep them practicing on the days that we don't meet? Should I eventually teach them to read some sight words in French (I can't imagine teaching them what each letter can sound like, not when vowels are so different from English, and they're almost certainly getting phonics instruction in school)?

I'll let you loyal readers know when (if?) I get any of this figured out! Expect posts on our progress every month or so; I'll also try to give directions for specific activities. Advice, as always, is welcome.
Posted by Sarah @ Baby Bilingual at 8:42 PM