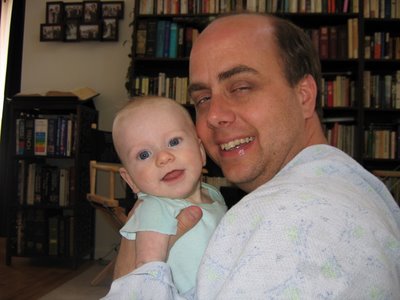 I've been traveling and thus haven't posted in a while, but you can expect a book review soon! However, I did see Carl last week--now he can turn over from back to front and vice versa--and he even seems to raise his arms when he wants to be picked up. Very hard to resist. (Here's his uncle, my husband Ed, giving in.)

First "accidental French" discovery: While in Portland last week, I visited Powells, an amazingly well-stocked bookstore even bigger than Denver's own beloved Tattered Cover. Powells' selection of books made me wish we weren't going home that evening--I could've spent days there! Their French collection was particularly impressive--probably eight entire sizeable bookcases. Quelle surprise! Of the numerous children's books in French, I limited myself to a couple of songbooks, one of which has an accompanying website that plays the music. (Enter 15 when it asks for the page number to hear the melody of "Savez-vous planter les choux," the cabbage song I mentioned in an earlier post.) Now I can expand my repetoire so Carl won't get bored with the few children's songs I know well in French!

Second "accidental French" discovery: Ed and I babysat for some friends' children on Friday night: 15-month-old Charlie and almost-four Zoe. Although their parents are considering enrolling Zoe in Lafayette's bilingual (Spanish-English) elementary school, for now the kids speak only English. Nevertheless, I found it very hard to speak English to Charlie! Apparently after just a couple of months with Carl, my brain and mouth are convinced that when I'm around a very young child I need to use French with him. I actually had to stop and translate my comments into English sometimes! But at bedtime, I went ahead and sang "Au clair de la lune" to him anyway--it makes for a lovely lullaby. (Enter 4 on the song website to hear it without the words.)
Posted by Sarah @ Baby Bilingual at 10:48 PM